The Next Big Thing - Chapter 1

Liz Allaire and Dan Murray arrive in front of FitzRandolph’s theater to cover the Annual Horror Film Award Show. Dan refuses to enter the theater and that forces Liz to cover the show by herself. Liz comes back outside. Dan, a sportswriter has been drinking in the open car. Amidst their quarreling, they spy Big Albert, one of the monster movie actors entering through the window of FitzRandolph’s office. Liz insists that Dan joins her inside to investigate, but he is quite happy to stay outside. “I’m a sportswriter. If he hits you with a baseball bat, call me.” 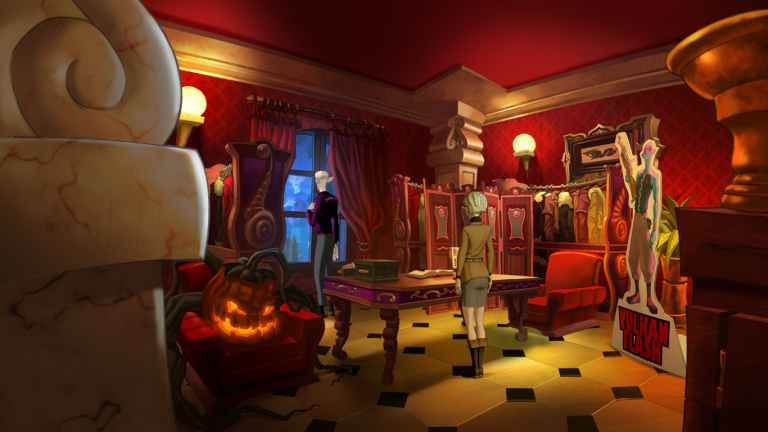 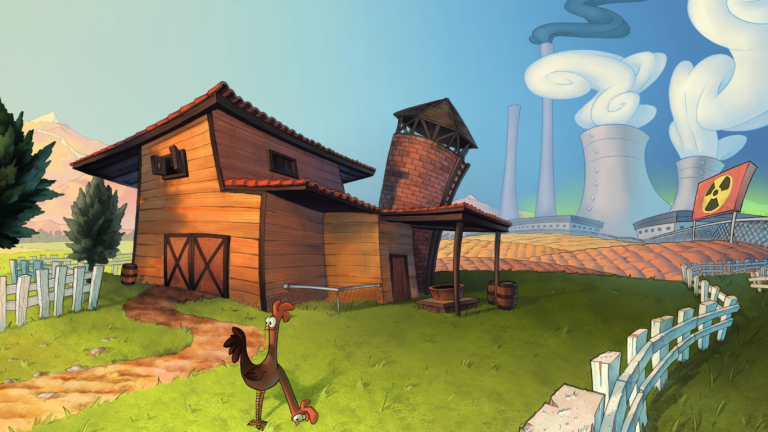 As the game starts, you take control of Liz. In her inventory is a tape recorder and press pass. Talk to Dan. Learn that the boss at The Quill newspaper took him off sports coverage. Learn also that Big Albert has the brain of a scientist and is the smartest man in the world. Dan is drinking Pumpkin Punch, not AntiFreeze as he previously declared. Exhaust all topics to learn as much as you can. Check the trunk of the car – Dan won’t let you open it, and the hood of the car – it reminds Liz of her fear of crocodiles.

Go right to the mansion. Look at the other building. It is the theatre. You can try to go there by right-clicking, but it will say it’s closed and nobody is there. Check and then try to pet Tobby the 3rd, FitzRandolph’s dog in the doghouse. Go right and talk to Phil the gardener robot with a saw as a hand in front of a door at cellar of the mansion. Phil is extremely depressed and wants his life to end. “I’m dying…I’m not dying…I’m dying….I’m not dying” The door behind him leads to the tool shed. Talk to him about everything. 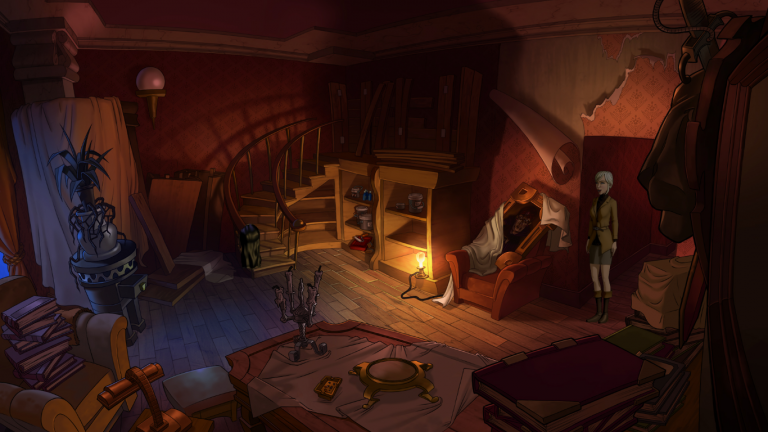 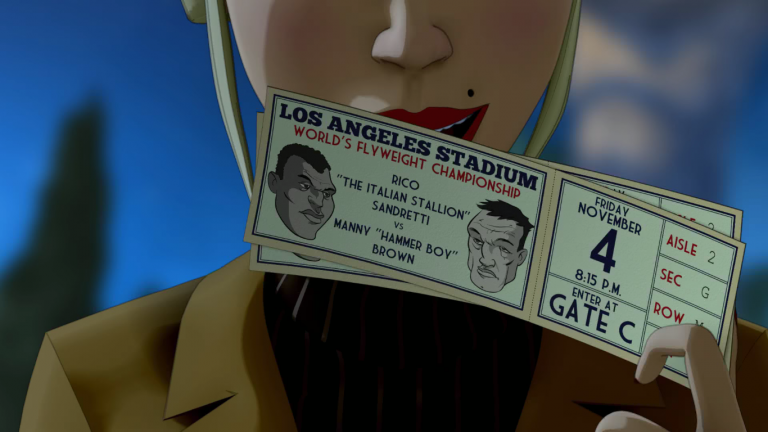 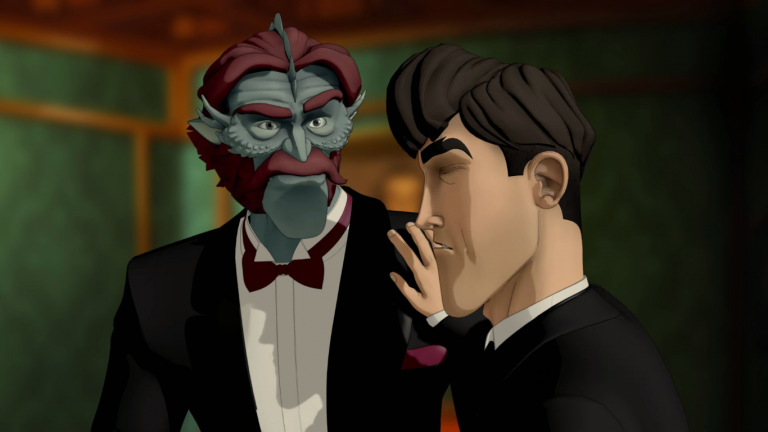 Examine the window on the first floor above Phil. Try to enter. “I can’t go in there. Someone might see me like we saw Big Albert”. Enter the mansion by the front door. Liz is stopped by William A. FitzRandolph. FitzRandolph is a monster born of human father and monster mother and owner of MKO Pictures. MKO Pictures features monsters as movie stars. Talk to FitzRandolph completely. Learn that he is a friend of Dan Murray. FitzRandolph owns the LA Freaks, the baseball team. Watch Liz say dis-concerting things – like anticipating the end of sentences. Automatically be outside. Try to talk Dan to come in and distract FitzRandolph. He refuses. But he does confess to missing watching a fight tonight that he put a bet on, because he was sent on this assignment as a punishment. He also mentions another fight taking place on Friday that he hopes he won’t miss.

CONVINCE EDGAR THAT HE CAN BE THE NEXT VULKAN FLASH

Go back to the mansion. Talk to the 2 robots called “Gorilla” guarding the stairs in the vestibule. They are created by Dr. Zelssius. Liz calls them Short Stuff. They have only 3 replies: Restricted area, Negative and I punch you. Try to find out what’s upstairs (restricted area). Ask what would happen if you went upstairs (I punch you). The “Fill in the blanks” conversation topics are quite amusing. Obviously, they are not going to let you pass. Go to the first corridor on the left beside the left staircase. It’s a coat check room. You will find Edgar rehearsing by the window. Edgar Kajdanovski is the gofer at the FitzRandolph mansion. He wants to be a movie star but he is not scary enough. Learn that he grew up in a nice farm but a radioactive factory was built beside the farm. And he wonders why he turned out peculiar? Examine the sign on the desk and Edgar’s autograph book. 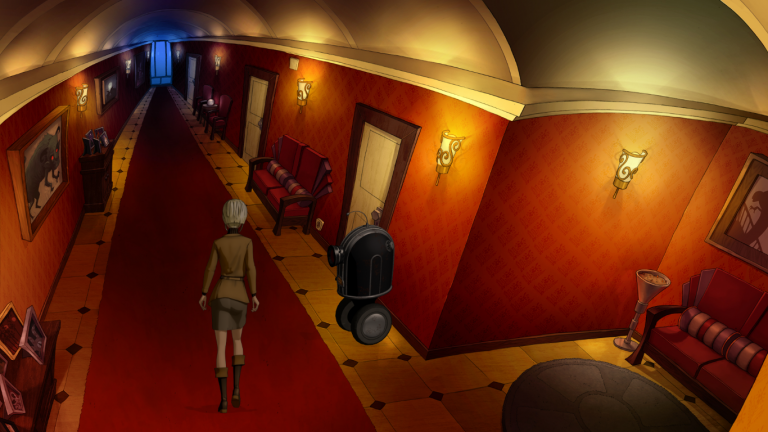 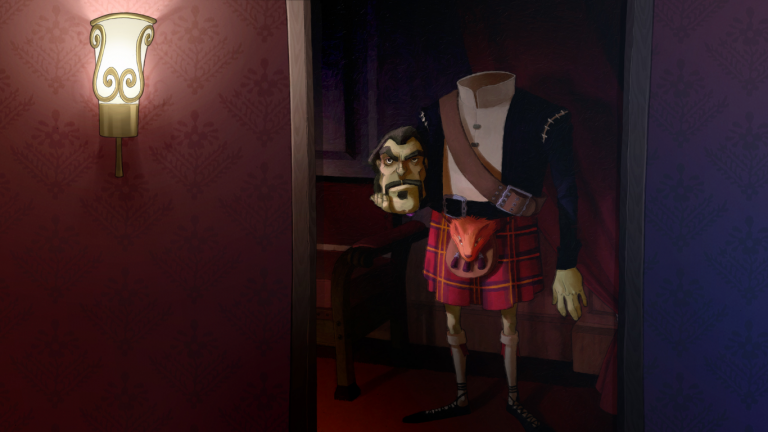 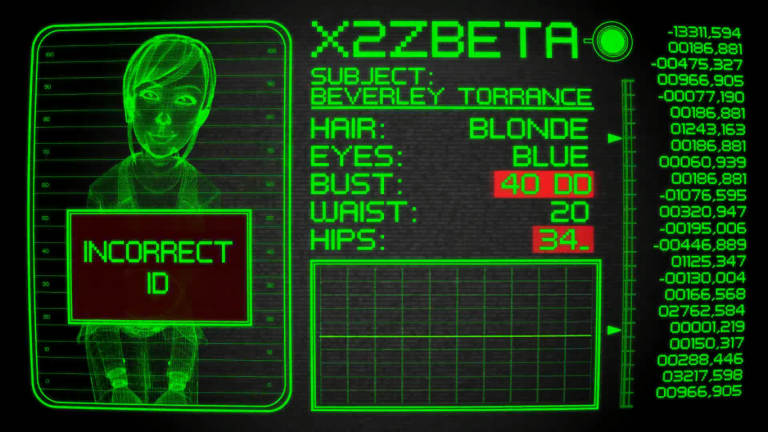 Look at the Vulkan Flash cutout at right. Vulkan Flash was played by Blue Harrelson. Earlier, Dan mentioned that Blue disappeared and reappeared surgically altered. Liz thinks that Edgar looks like Vulkan Flash. In inventory, a complete alien kit appears. Study the cutout and see that Vulkan Flash wears glasses; has blue skin and wears a vest. Exit the check room to return to the vestibule. Take the glasses (they could be Professor Fly’s) from the pumpkin on top of the newel of the right stairs. Enter the second corridor at left after the way to the coat check. See that it is an unfinished reading room. Look around. Check the bookcase and take the small blue dye-pigment bottle. Examine and then take the vest hanging on the stair’s newel. In inventory combine the glasses, blue color and vest with the complete alien kit to get a complete dressed alien kit. Go back to Edgar at the coat check room and use the complete dressed alien kit on him. Edgar is happy and is back to rehearsing. Liz has Hammer Boy Brown the boxer’s vest in inventory to keep it away from the paint.

Examine the vest in inventory and get 2 boxing tickets. Guess who loves sports and is a former sportswriter. Exit the cloak room and mansion. Go to the car and use the tickets on Dan. There he goes. Dan greets FitzRandolph and they enter the party. 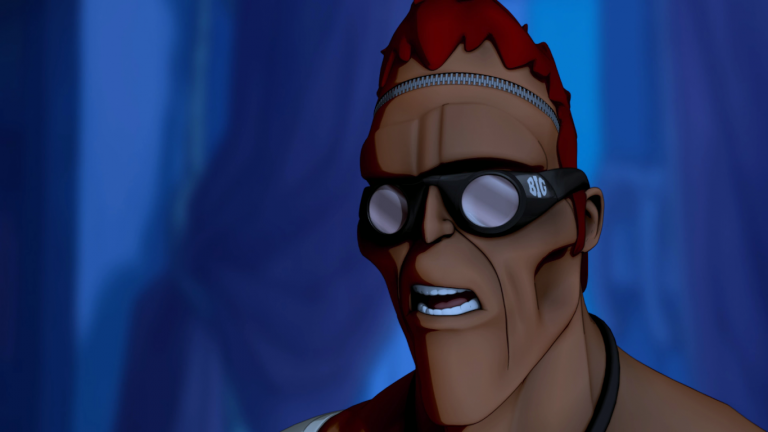 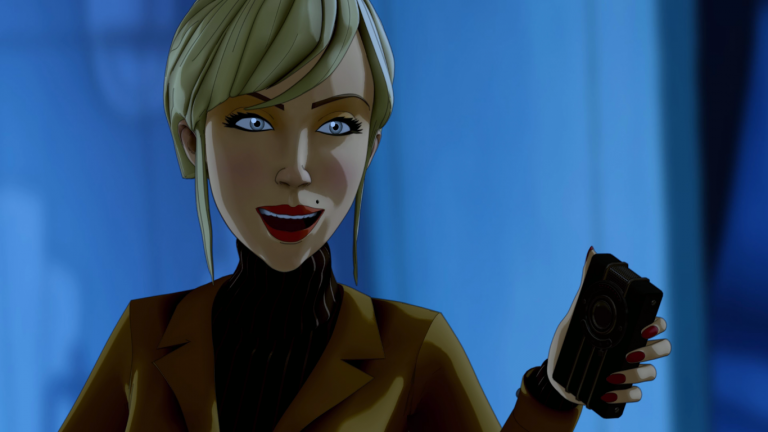 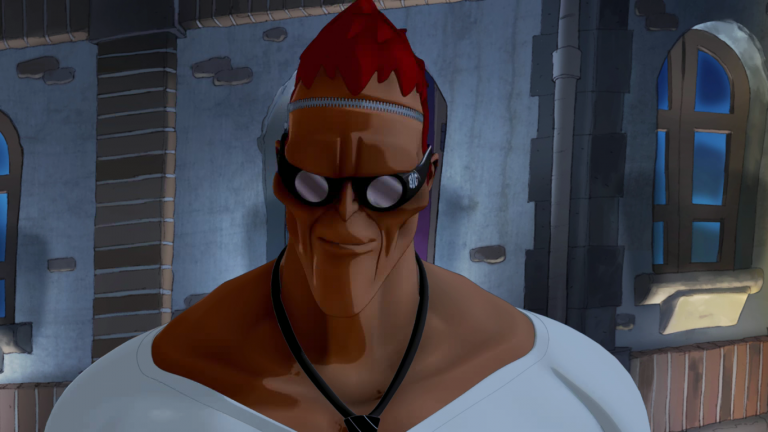 GET JIMMY LOVE TO OPEN THE OFFICE DOOR

If you want, you can prepare for the next steps while you are by the car. Take Dan’s hip flask from the hood of the car. Open the trunk and Liz takes an empty oil can. In inventory, combine the empty oil can with Dan’s flask to get pumpkin punch in the oil can. Now return to the mansion. Enter the hall-doorway right of the sofa where FitzRandolph was sitting. See the hallway where the offices are located. A robot is sleeping by the first door. Liz checks 2 doors. Examine all the paintings on the left wall. Talk to wake up the robot guard. His name is Jimmy Love. Liz tries to pass off as FitzRandolph’s secretary. Jimmy scans Liz and her measurements do not match that of Beverley Torrance. Access denied. Ask why Jimmy is sleepy. He’s on conservation mode because he’s low on oil. Talk to Jimmy to give him the pumpkin punch in the oil can. He says he can’t drink, he will get fired. “No, no, no… I don’t dare. He (FitzRandolph) could show up any moment like a summer thunderstorm” Talk to Jimmy again to open the second door and get a new scan. Watch Jimmy open the door in his drunken stupor. 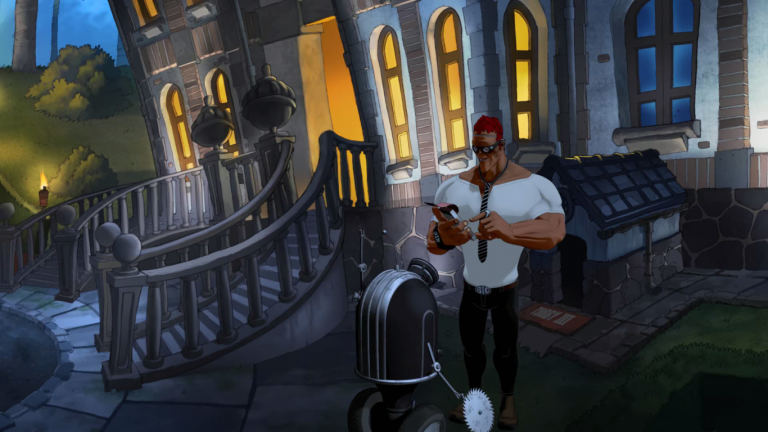 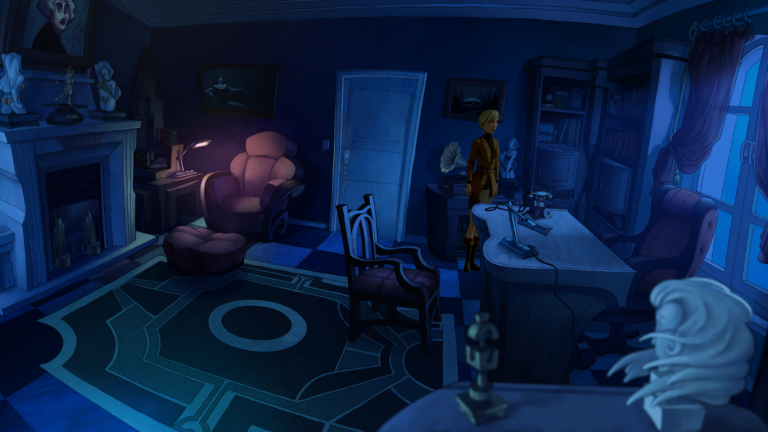 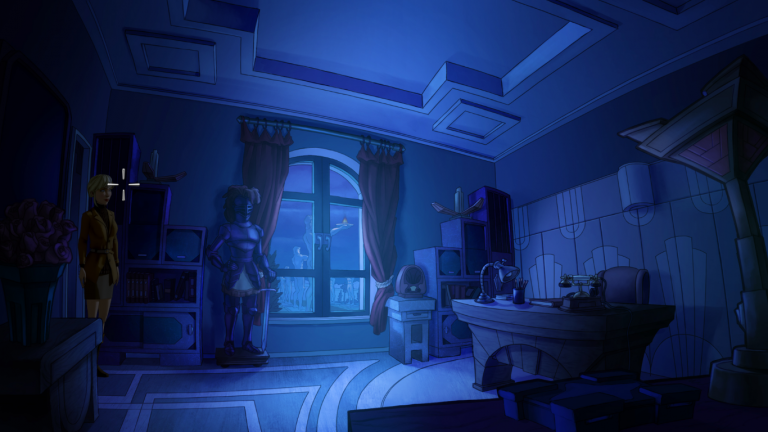 Liz confronts (tries to interview) Big Albert while he is searching FitzRandolph’s desk. Big Albert jumps out the window. He writes a note and gives it to Phil the gardener to give to the Immaterial Man. Big Albert throws the notepad into Tobby’s doghouse. Examine the sculptures until it is no longer possible, Eva Morte’s portrait, armchair, phonograph and window in FitzRandolph’s office. Exit the office and see Phil the gardener leaving the mansion’s vestibule. Go outside and check the doghouse. Tobby is not cooperative. Talk to Phil in front of the tool shed door. Note the melancholic music in the background whenever you converse with Phil the Gardener. Ask him about Big Albert. You can also talk to him about being a robot, and that he won’t die. Phil finds this disconcerting. Question Phil about the note. Phil no longer has the note. He ran into the immaterial man and passed it onto him. “Everything meets its end sooner or later”. Go back inside the mansion. Go to the sofa and armchair where FitzRandolph was sitting earlier. Take the crank from the armchair. Go back to the secretary’s office. Get a pencil from the mug on her desk.

Enter FitzRandolph’s office. Check the phonograph. Use the crank with the phonograph and hear a sound coming from Beverley’s office. Go to secretary’s office. See a round canopied bed. Check the bookshelves left of the bed. Get a tin of caviar. If you want, you can crank the phonograph again in FitzRandolph’s office to get the table back (especially if you forget to pick up the pencil like I did). Go back outside to Tobby’s doghouse. Use the caviar on the doghouse and Liz throws the caviar on the lawn. Tobby comes out. Tobby is a Venus flytrap. Liz takes the notebook from inside the doghouse. In inventory, combine the notebook with the pencil from Beverly’s mug. Read the writing – Warehouse ASAP. Liz goes around the corner to the side of the mansion. See Big Albert’s body on the floor. The Immaterial Man warns Liz that the men that did this will be coming back here soon. They have to hide the body in the sarcophagus. 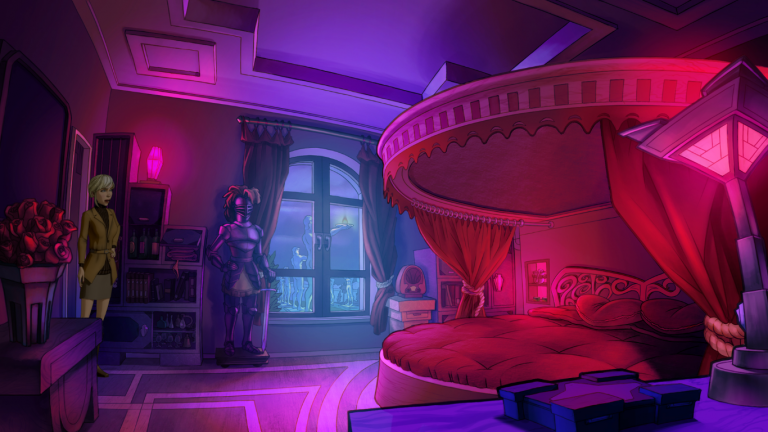 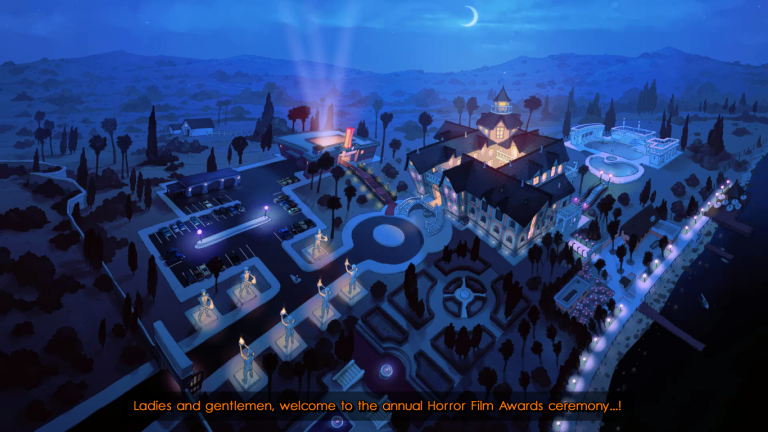 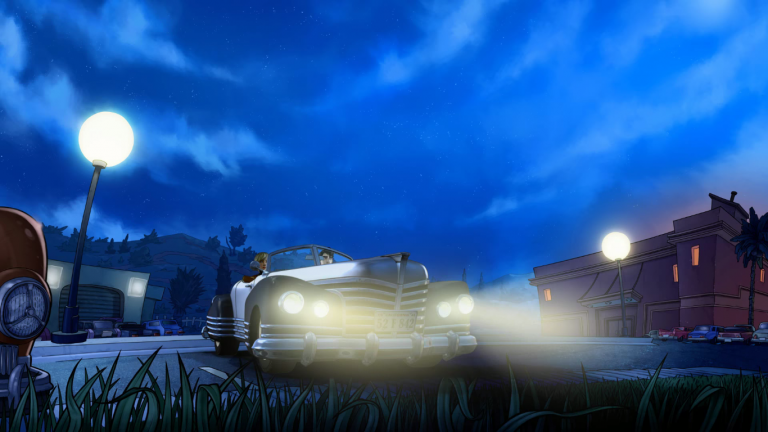