The Next Big Thing - Chapter 2

Dan soaking in the tub with a hangover gets a call from his very angry boss. Dan and Liz have not reported in nor submitted the article about the award last night. Dan goes back to the mansion and goes to the warehouse where Edgar told him Liz was last seen. 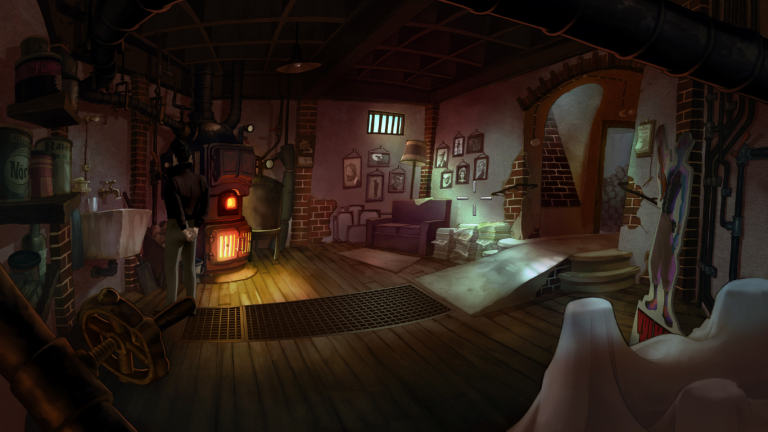 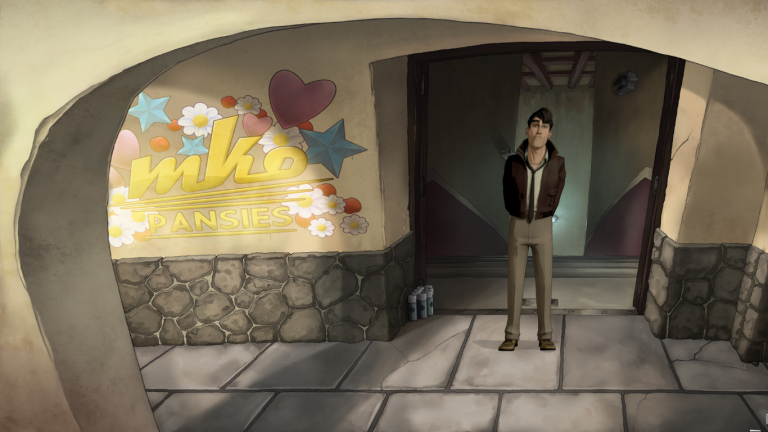 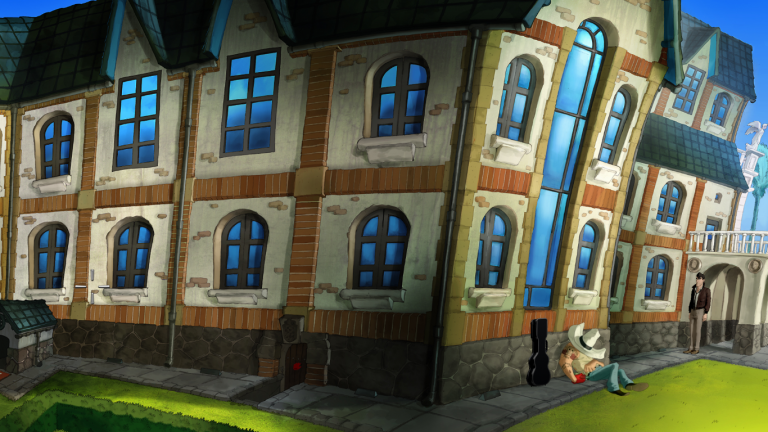 REVEAL WHAT HAPPENED TO LIZ

You now take control of Dan. In his inventory, you will find a hat, a sportcard and an empty space where his press pass should be. Look around the storeroom. Examine the belt under the sink. It belongs to Liz. Take the belt. Examine the boiler. You can’t put it out. Examine the sofa. Take a 5-min nap if you want. Check the newspapers and find out that Dan used to deliver and he was also very good at petty theft. Check out the poster on the right. Exit and go left to the front of the mansion. Pet Tobby and see that Tobby is a Venus flytrap on a pot. Tobby dies yearly and Dan hasn’t seen him since he was Tobby the 2nd. Use the belt on Tobby’s doghouse. Tobby sniffs the belt to get Liz’s scent and then follows it. He goes into the warehouse and ends up at a trapdoor in front of the boiler. So, according to Tobby the 3rd, Liz is down there. Examine the trap door. Dan sees that he cannot just jump down there. “It’s too far. How would I get back up? Exit the storeroom. Talk to Edgar spray painting the wall’s graffiti about everything. “Why are you dressed like an idiot?” “Who convinced you to dress like an idiot?” “Willie” has requested that the Zeppelin be prepared.

Go left to mansion and then right to the pier. Look around at the Galleon “I hate pirate movies”, the Zeppelin “That’s what Willie uses when he has to go to festivals and other movie events” and studio “Willie’s monster factory. I don’t see why people are so impressed by it”. Go to the ship at the end of the dock and find that it is closed. See a rope tied to the fencepost. Try to take the rope and Dan says that it has the mother of all knots. Go back to the side of the mansion and see El Chupacabras napping. See that he is wearing a red glove. Go left to Phil’s garden shed door. See one of the Chupacabras’ claws on the door. Try to take the claw. It’s in there tight. Go left twice to be at the Falcon Spirit car. Check the Falcon Spirit. Dan’s editor lent the car to Dan. It’s his wife’s. Dan’s car was in an accident. “Some people never learn”. You can click on the car and options to go somewhere will come up. Take the bat sticking out of the back seat. Go back to the claw on the door at the mansion. Use the bat on the claw to get the claw. Any excuse to use a baseball bat. Go right to the pier. Use the claw with the tied rope. Dan doesn’t know what he wants it for. 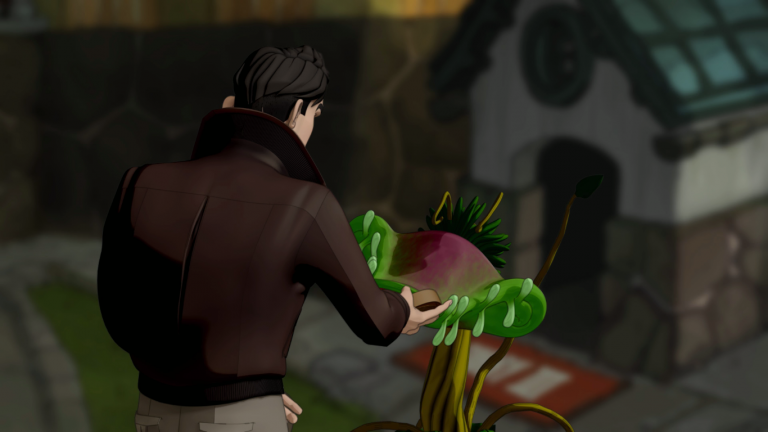 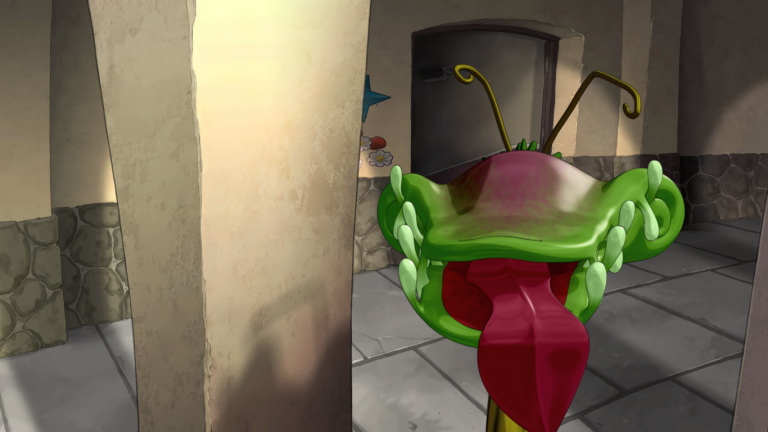 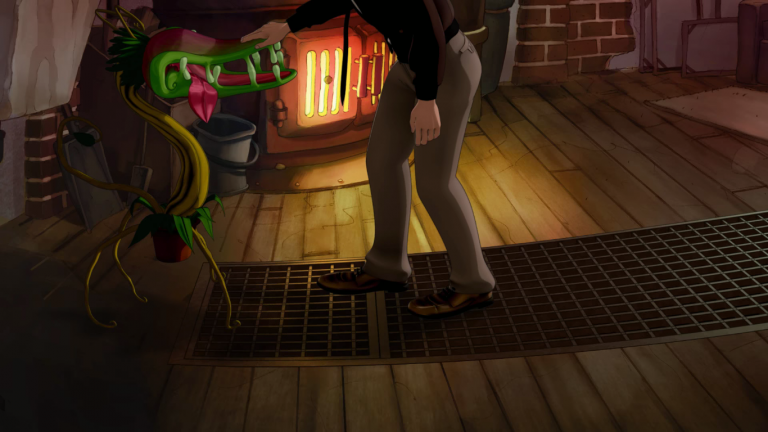 Go back to the trap door in the storeroom. Use the rope on the trapdoor. Dan climbs down and picks up Liz’ tape recorder. Dan listens to what happened to Liz, Big Al and Immaterial Man. Big Al was placed in a sarcophagus. Dan learned from Edgar that the sarcophagus was delivered to the Temple of Eternal Illusion where the Sorceress Krom-Ha reigns. All those who enter are scanned for brain activity and the temple is filled with traps.

Dan has to find a way to get to the temple. Go to the pier and Dan automatically goes to the docked ship. Overhear a discussion between Professor Fly and The Poet. The Poet angrily walks out of the ship. Dan enters and talks to Professor Fly. Learn that The Poet wants him to build a machine and be the volunteer for the new machine. Professor Fly demonstrates the teleport machine. Dan wants to be the tester of the machine. Prof. Fly says it is morally reprehensible to do so since the machine is in the zeta stage of development and is lethal especially to the liver. There are 3 requirements:

One should be completely expendable to society.

The life expectancy should be less that 1 year, 2 months, 9 days and 37 minutes.

The volunteer must pass a psychological test. 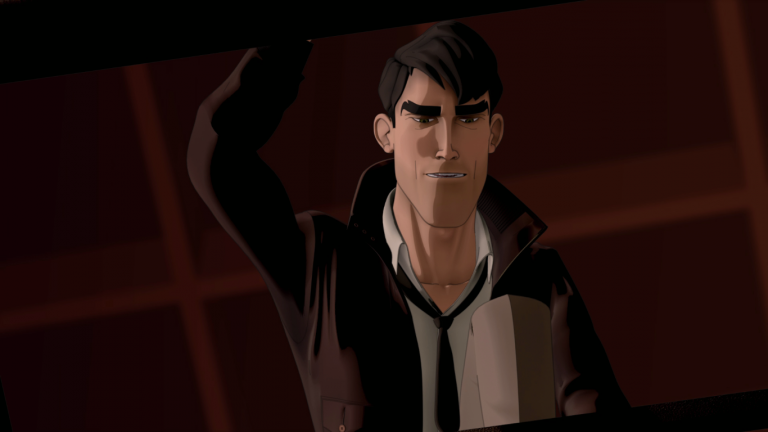 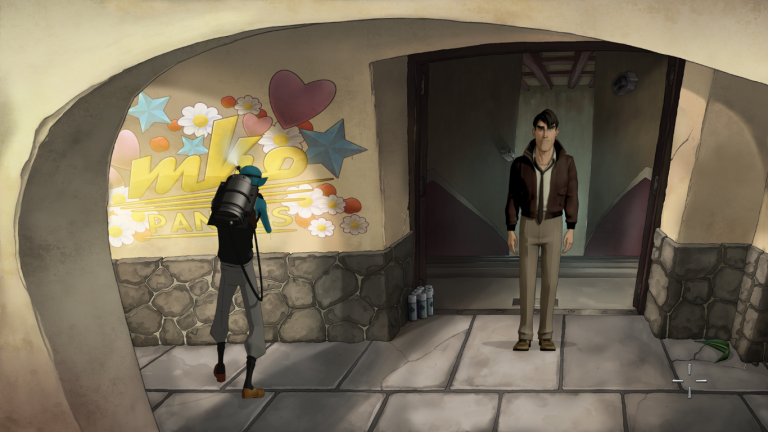 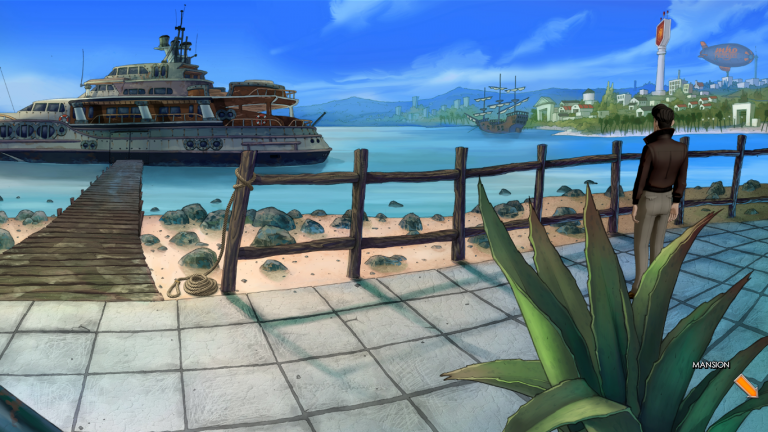 Ask Fly about the Psychic Devastation Test. See that there are 4 little ink blots. Select any answer and not get anywhere. Ask about the Poet. Learn that he published 3 poetry books already. He is now repeating himself. The theme of the poetries is the same – pain. Send the Professor back to the ceiling. Exit the ship. Dan talks to the poet. See that he is burning his hand with the ray of the sun. The poet gets an inspiration and recites: An internal sun scorches my skin, two-faced, cruel. He wants more pain and Dan is going to give it to him. Go to the black board at left. Use the claw on the board. Ouch! The poet gets an inspiration and recites: My ear, by a thousand bees mortally wounded, bursts joyfully. Go right to the mansion. Take and open the charangote (guitar case) beside the El Chupacabras having his siesta. It is a kit for making Margaritas. The salt shaker is shaped like a cactus. Go back to the poet and give him the salt and lemon. Eek! The poet gets an inspiration and recites: Like a ravenous zombie, my right eye devours my brain. Go right to the mansion and then go left twice to the car. Pick up the corkscrew on the grass by Dan’s foot. “People lose all kinds of things at parties!” It is Mr. Death’s soul extractor. Go back to the poet and give him the soul extractor. Ugh! The poet gets an inspiration and recites: And you think that doesn’t hurt? I lost a molar. Go back to the ship and call Fly down from the ceiling. Ask to take the test. Select the verses recited by The Poet. 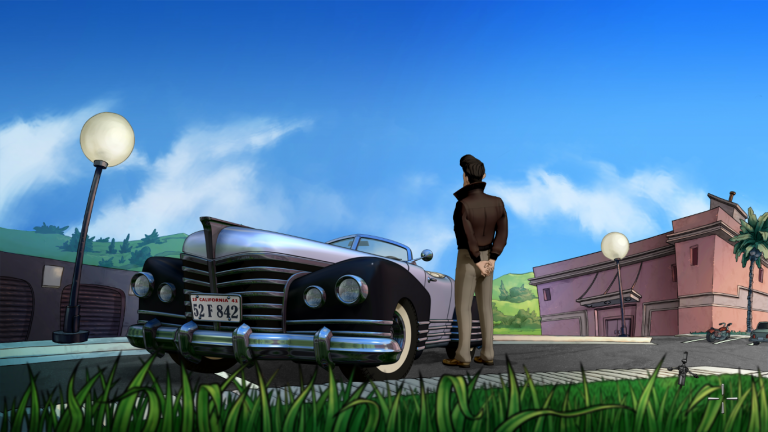 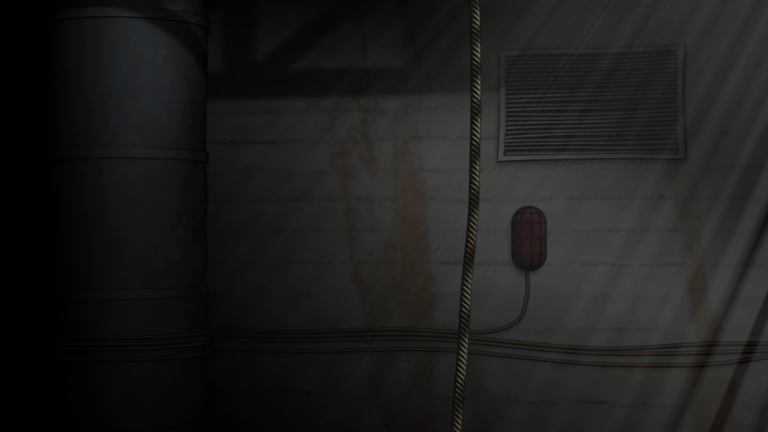 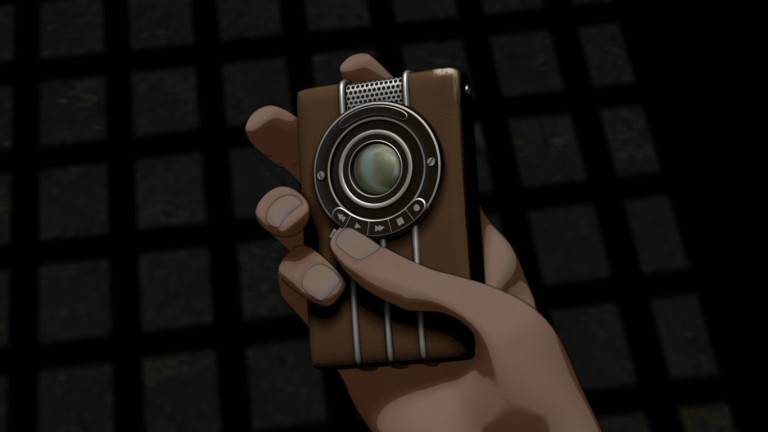 “A hellish sun scorches my skin, implacable, two-faced, cruel. My ear, by a thousand bees mortally wounded buzzing, thunderously ruptures. Like a ravenous zombie, my right eye devouring my brain. How is that not supposed to hurt? I’ve lost a molar. Congratulations! Send the Professor back to the ceiling. Exit the ship.

Call Professor Fly from the ceiling. Ask how to be considered to be socially expendable. Prof. Fly says that he won’t discuss it since he’s employed by The Quill newspaper. Ah – employed. Send the Professor back to the ceiling. Take the camera on the floor between the 2 machines. Exit the ship. Go to the car left of the mansion. It was loaned to Dan by his editor. It is the editor’s wife’s car, remember? Use the baseball bat on the car. Dan weighs the pros and cons. “If I destroy the boss’s wife’s car and show him that I did it, he’ll fire me. That way Professor Fly will consider me and then I’ll be a step closer to finding Liz which will prevent me from being fired.” The boxing match tilts the scale. The 2 robots happily watch Dan in action. Use the camera on the customized Falcon Spirit. Dan calls the robot to use the camera. The editor calls for a termination paper after seeing the photo. Professor declares Dan socially expendable.

HAVE A MINIMUM LIFE EXPECTANCY

Go to the right area of the lab. Use the Life-O-Meter by the right wall. Call Fly from the ceiling and ask about the breatholator in the corner. It determines from the breath the life expectancy of the person. Send Fly back to the ceiling. Exit the ship and go by the storeroom. Take the leaf at the right corner in front of the entrance to storeroom. Tobby dropped it. Every winter, Tobby dies. Go back to the lab at the ship. Go to the breatholator at right corner. Use the Life-o-meter. Dan has 5 years, 6 months, 12 days and 9 hours left. Use Tobby’s leaf on the life-o-meter. Dan chews the leaf and takes the test. He now has 0 years, 0 months, 19 days and 3 hours left. Fly is informed. Dan passes all the tests – the perfect volunteer. 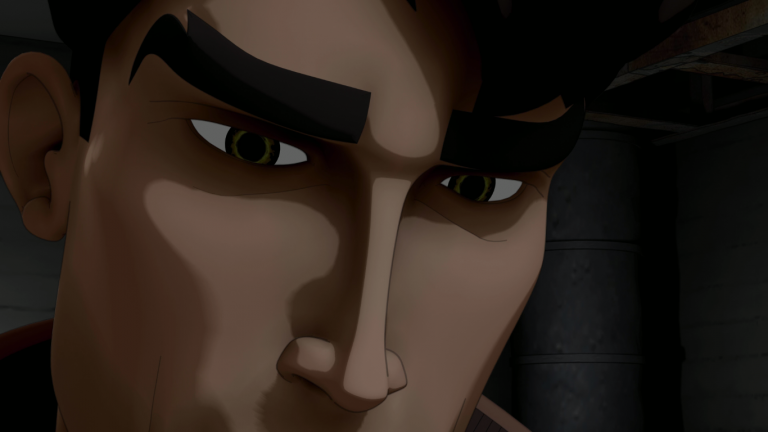 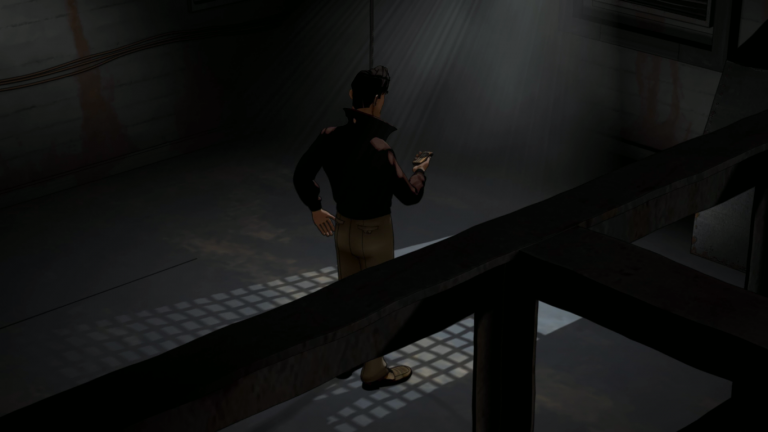 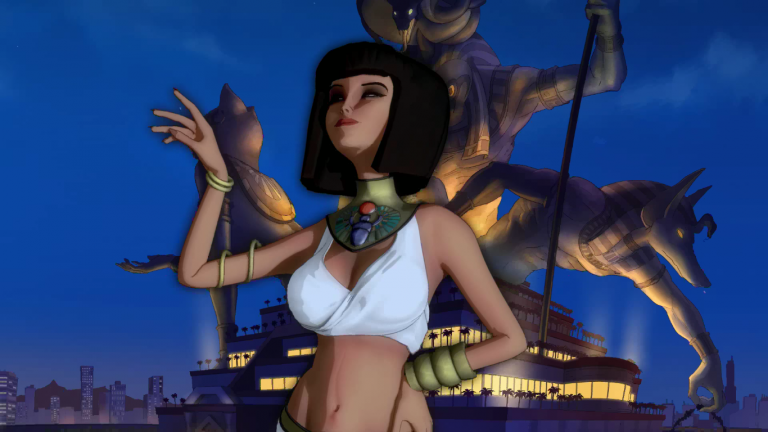 INFILTRATING THE TEMPLE OF ETERNAL ILLUSION

See the machine test. Dan exits the other machine. Dan has to send one of the machines to the residence of High Priestess Krom-Ha. Call Fly and tell him: Teleporting yourself 5 meters is for amateurs. Watch The Poet carry the teleporter in the storeroom.

SENDING THE TRANSPORTER TO THE TEMPLE 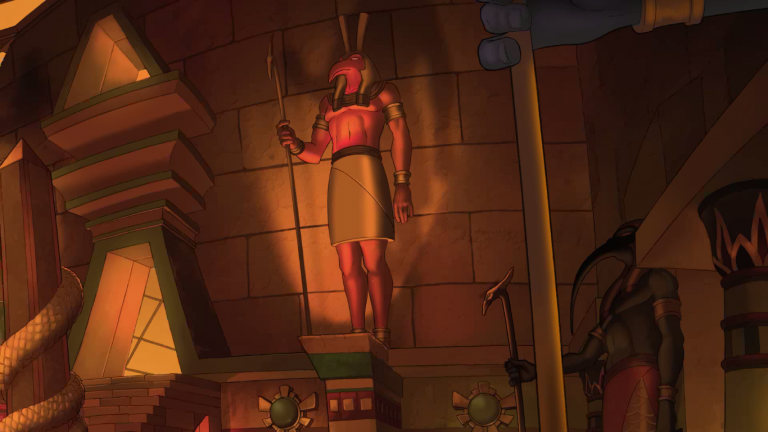 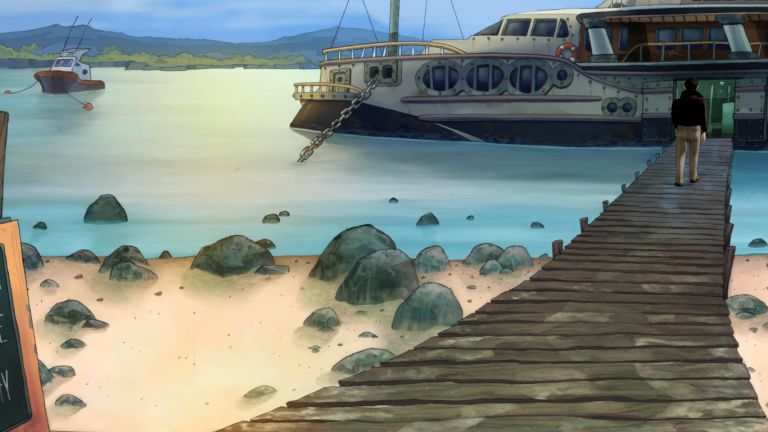 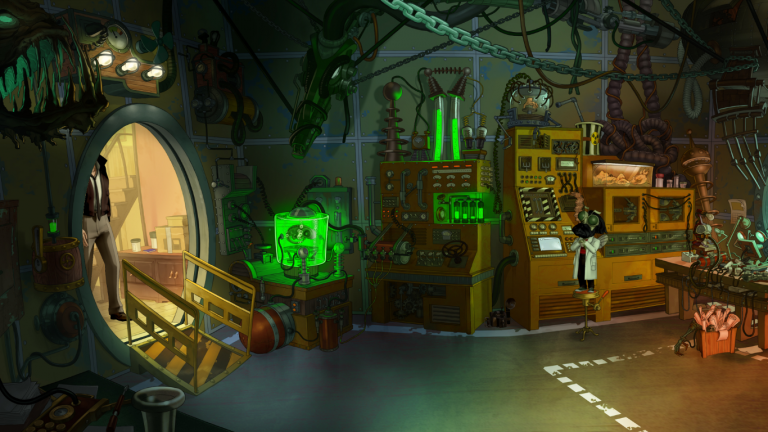