The Next Big Thing - Chapter 3 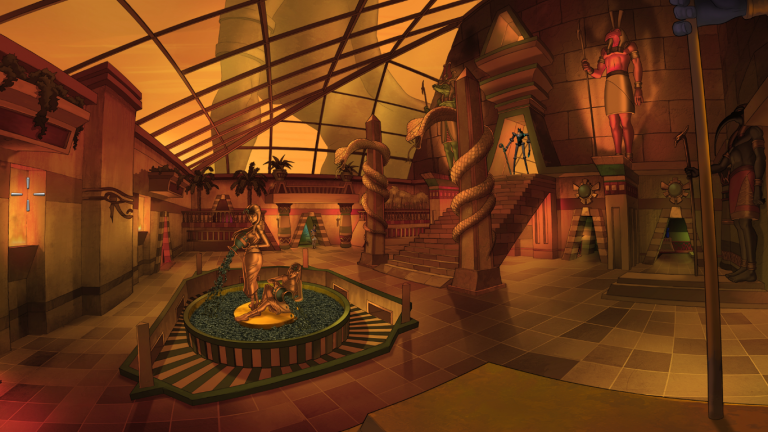 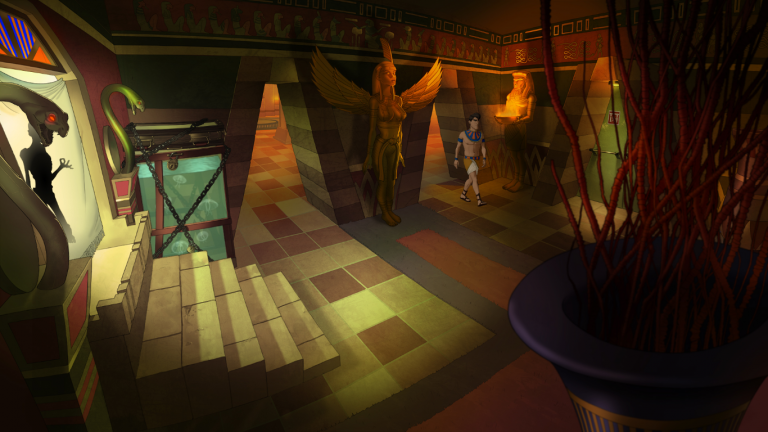 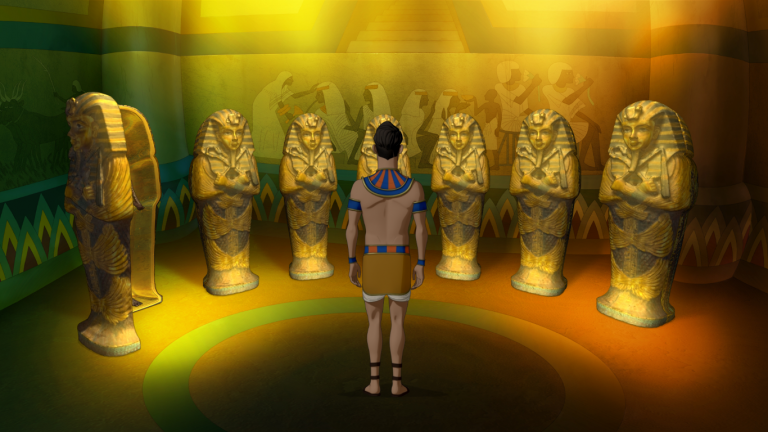 Krom-ha wants Dan to stay by her side forever and satisfy her needs. Dan wants to order the robots to open the other sarcophagus. Krom-Ha says that only the wearer of the pendant Dr. Zelssius made is obeyed by the robots. She never takes the pendant off her neck. Just ask the Oracle of the Shadows. Dan has the bat and the remote control in inventory.

GIVE 8 HIEROGLYPHICS TO THE ORACLE OF THE SHADOWS

Look around in the bedroom: the bath “who would put a bath in the bedroom?”, vase “It’s full of coins”, bed “I bet the cows on the posts are gods” and the plant on the right of the room “I don’t get along well with the vegetable kingdom”. Talk to Krom-Ha. Learn that she is a mummy. Learn also where the Oracle is located. Exit the bedroom. Look around at the hall. Check out the eye on the far left wall, the 2 snakes wrapped around the pillars in the middle of the room “impressive, a cobra, I believe”, the guard at the top of the stairs guarding the temple exit and the statue on the far right “he has a nose like an anteater”.

Enter one of the double doors stated by Krom-Ha as the room of the Oracle of Shadows. These are on the far right of the room. Enter either of them – it doesn’t matter. Dan talks to the Oracle. The Oracle knows all about Dan and that he’s trying to get the pendant from the High Priestess. The only way to get the pendant is to send the High Priestess back to the Land of the Dead. To do that Dan needs to read the Book of the Dead. The Oracle gives Dan a syntax test to see if he knows how to read hieroglyphics so that he doesn’t bring cataclysm to the world if he reads the book wrong. If Dan passes this test, the oracle will take him to the Book of the Dead. Look around the room and then exit. Examine the Oracle of the Shadows “Until I give him his 8 hieroglyphics, he’s of no use to me”, the fishbowl where Dan comments about escape artists, the birdwoman “what is it with these people that they have put wings on everything?”, the statue “It looks like Bobby Russell, the trainer for the LA Freaks” and the Emergency Exit “with what it took me to get into the temple, I’m not going anywhere”. 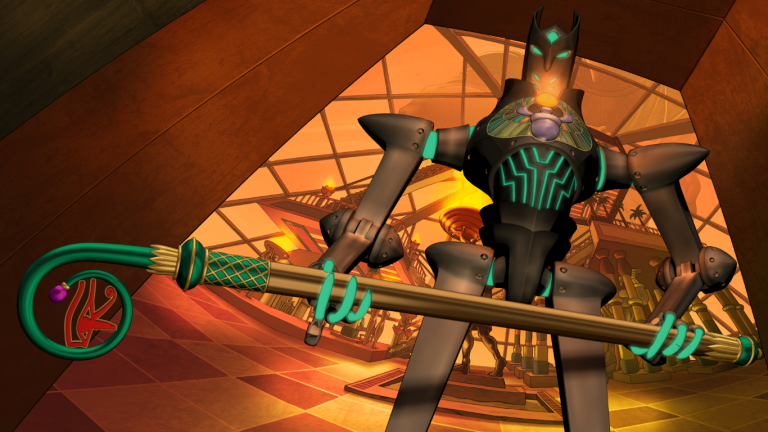 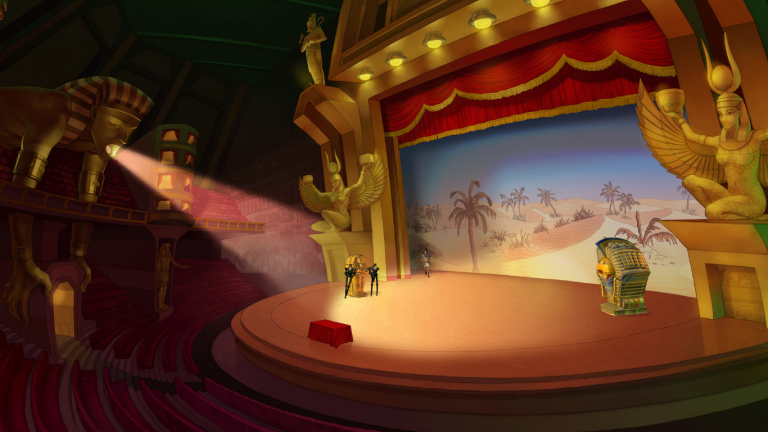 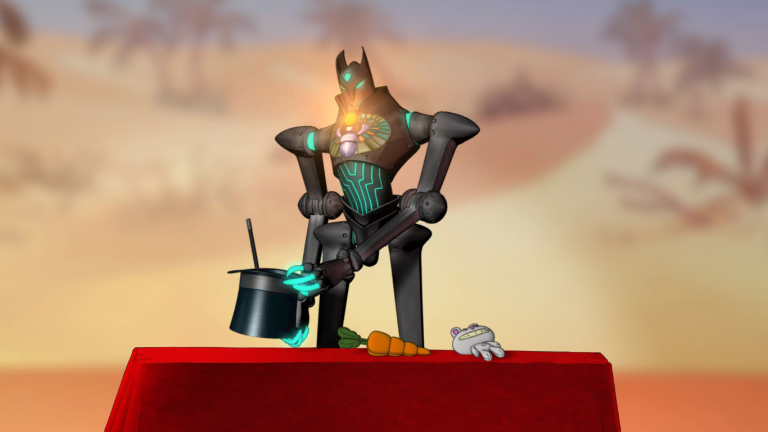 Enter the far door at right to be at the sarcophgium. See 7 sarcophagi. A mummy is seen in a sarcophagus. Then it is gone. Then another sarcophagus opens and the mummy is there. Dan has to find out the trick done here. This is a random shell puzzle. By doing more opening of the sarcophagi: note that he mummy starts and then jumps to another sarcophagus that is either 3, 4 or 5 sarcophagi away to the right (clockwise). So if the mummy appears 3 (4 or 5) sarcophagi away, count of to the third (fourth or fifth) sarcophagus and he will be there. Take the dagger the mummy is holding. Look at it in inventory and see a snake hieroglyph on the handle. That’s one hieroglyph.

FIND THE OTHER HIEROGLYPHS

Go back to the Oracle room. Look at the emergency sign on the exit door. Try to take the sign. Use the dagger on the sign to get the emergency sign with hieroglyph. “Looks more like a hockey goalkeeper”. Exit to the main hall. Talk to the guard at top of the stairs to the exit. See that he is so proud of the ancient staff he’s holding. It has a hieroglyph on the top. Give him the bat from inventory. Dan will tell him that it’s ancient. The staff with the bad eye is now in inventory. Go to the bedroom and talk to Krom-Ha. Ask her to give you a kiss. During the kiss, use hand cursor on the vase with coins. Take a coin. Look at the coin in inventory and see the duck hieroglyph on one side. Go to the hall and enter the door to the theatre at left. Talk to Pazzi, one of the 2 robots guarding the sarcophagus. Learn that Ducky does magic tricks. Ask to do a trick. See the top hat, carrot and stuff rabbit disappearing trick. Go to the table and take the top hat and magic wand. Exit the theatre. Enter the closest door right of the hall. See a suspended pyramid. Try to take it. Use the magic hat on the pyramid. Then use the magic wand on the top hat. Take the top hat and see that the stuffed rabbit is there replacing the pyramid. Go back to the theatre and the magic act table. Take the pyramid from the table. Look at pyramid in inventory and see that each side has a hieroglyph: lap dog, target, girl in profile with horns and wavy lines. 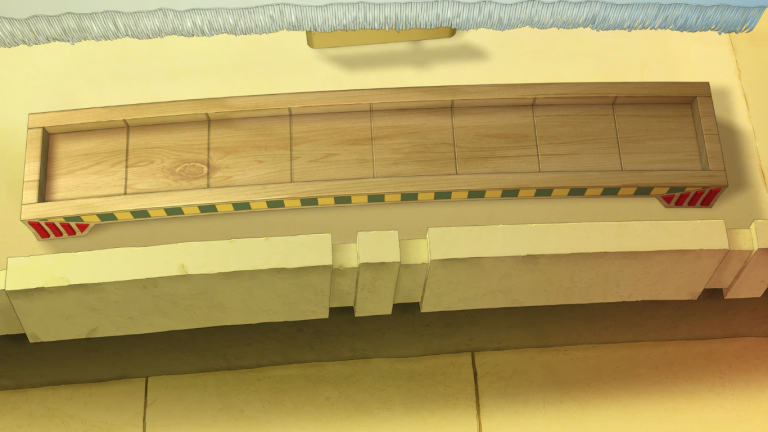 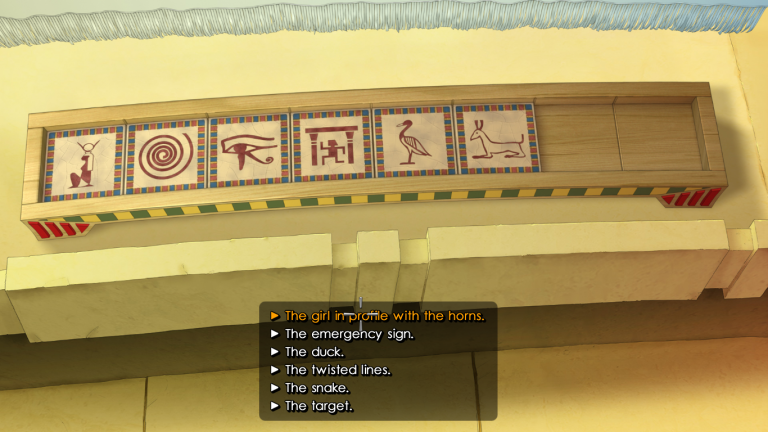 Go back to the Oracle. Give the items collected that has hieroglyphs to the Oracle: dagger, staff, coin (which only has 1 hieroglyph and not the 2 as previously thought), emergency sign and the pyramid (which has 4 hieroglyphs). Click the item on the half wit. The 8 hieroglyphs are placed in a wooden frame. The Oracle gives the syntax test. A set of hieroglyphs are placed in the frame. The object of the puzzle is to select the correct hieroglyphs from the list. Ignore the question given by the Oracle. The solution is based on the location of the hieroglyph in relation to the frame and the list. For example, if the Emergency Sign is 3rd on the list and also 3rd (from the left) on the frame, then this is the correct answer. Find the hieroglyph that is positioned on the frame that matches the position of its name on the list. You need to do 5 correct selections in a row. On completion, the Oracle then gives you a jar with a beetle in it – this is the key that opens the place that holds the Book of the Dead. The Oracle suddenly has a change of heart in revealing the place where the book is kept. He loves Krom-Ha and can’t do this to her. 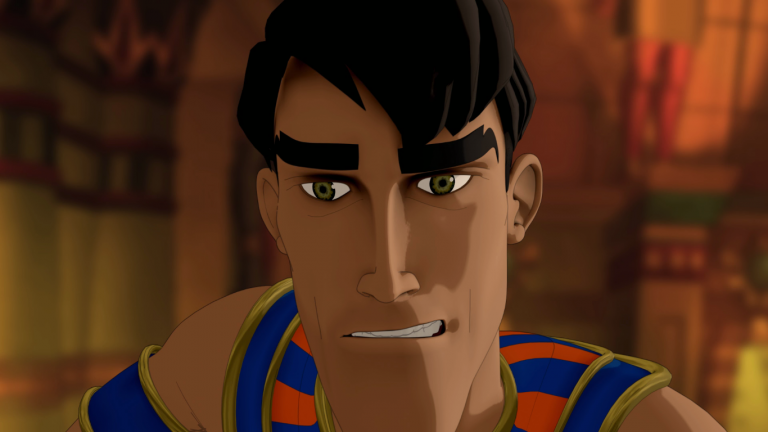 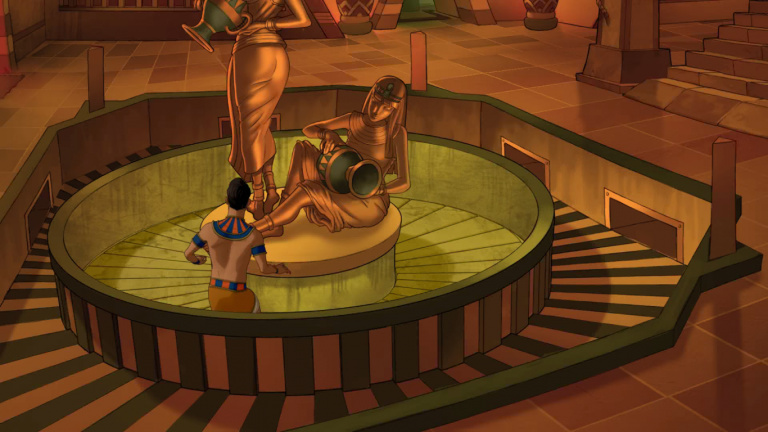 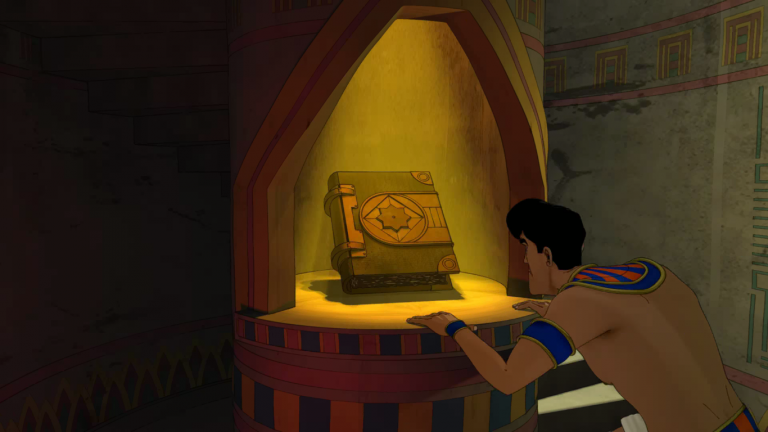 GET THE BOOK OF DEAD

At the hall, look at the fountain with 2 female statues at left. The pond is full of bugs. They are all male. Check the beetle in inventory. It is a female bug. Use the female beetle on the pond full of male beetles. The pond is emptied of bugs. Dan enters the pond and the spiral staircase appears. Dan takes the Book of the Dead. In inventory examine the book. Note the indent on the cover. Examine the pyramid. Dan states that the bottom has a strange shape. Use the pyramid on the book. At the bedroom and with Krom-Ha, watch Dan read the book. Select any of the choices on what to read. 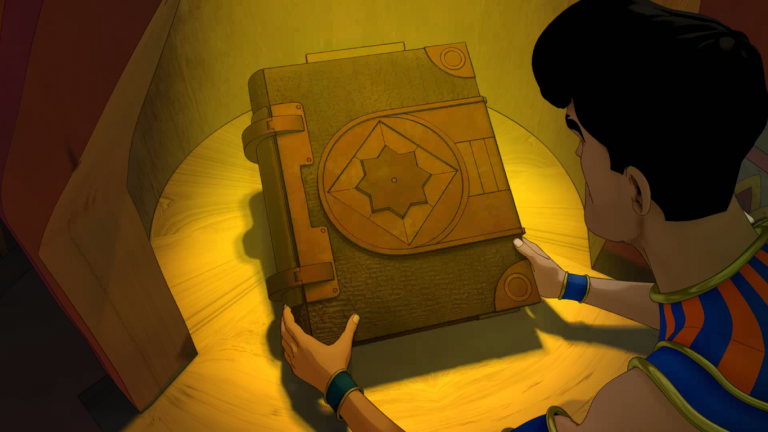 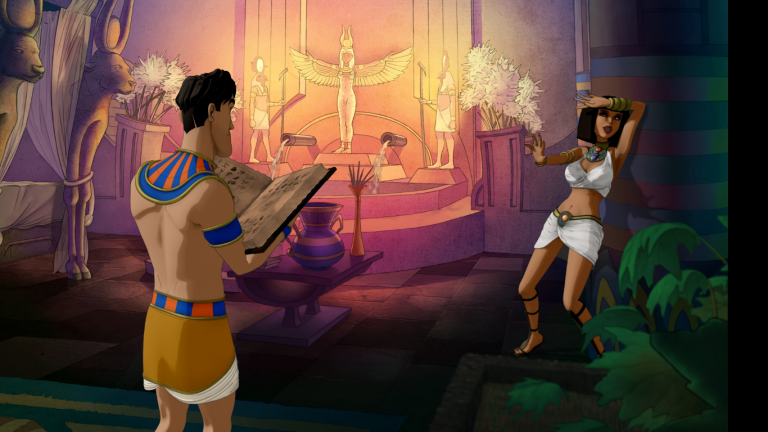 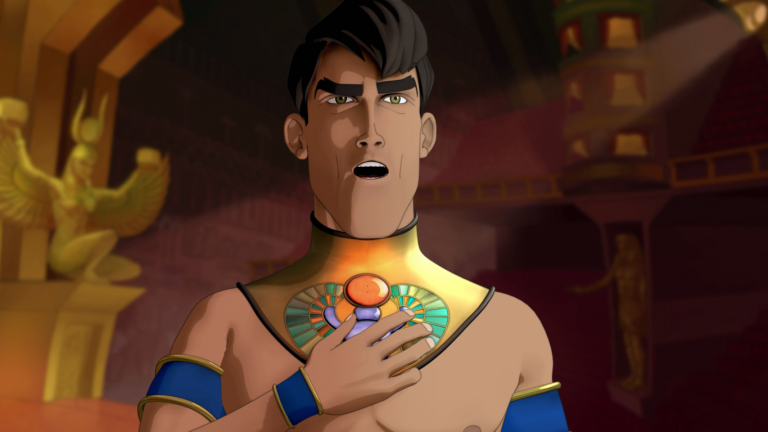 Watch Dan order the robot while wearing the pendant. At Professor Fly’s lab, they realize that Big Albert is missing his brain. The zipper is open. 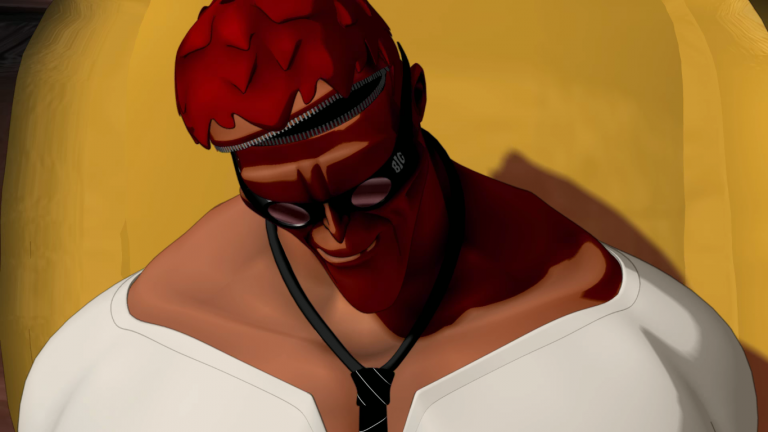 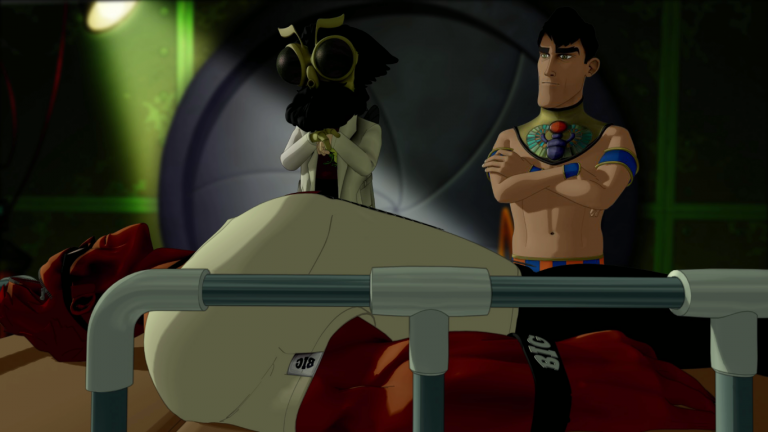 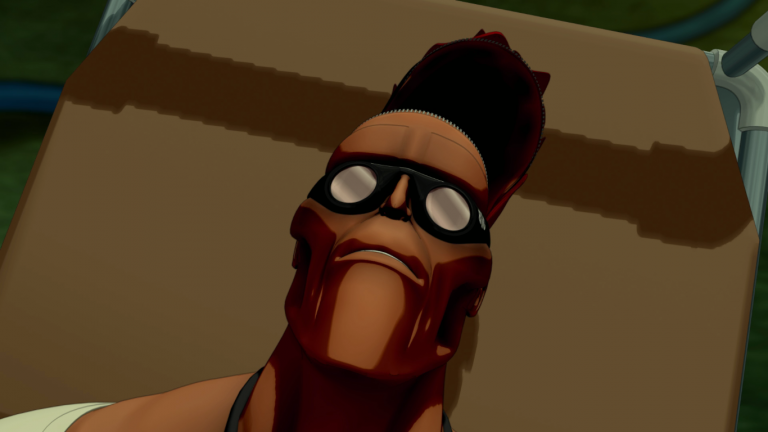