After the opening scene, in which you meet Buki for the first time, you will be controlling Tal, the main protagonist in the game. This is the basic training system, which will explain how to attack, as well as usingcombo. After you finish your training, explore the menu (button M) to familiarize yourself with the contents. The Navigation Map in the top left corner is also quite useful. 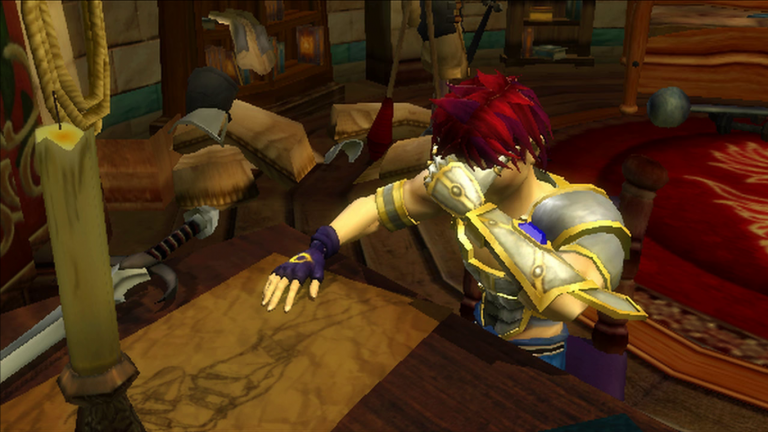 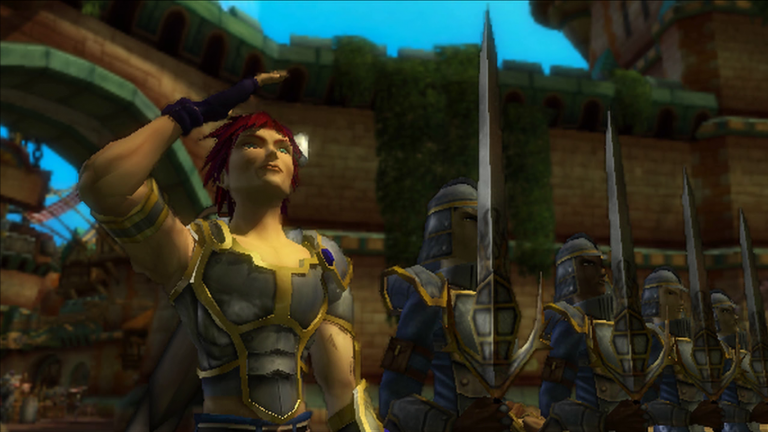 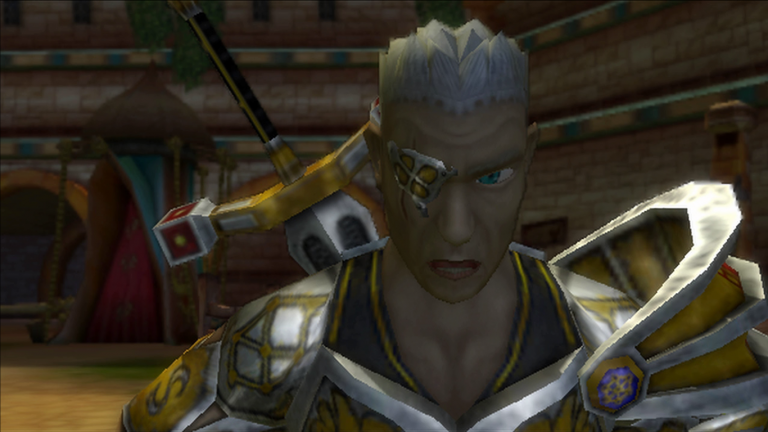 As soon as you start to move out, a fellow soldier, Wesley Dow, informs you that you need to pick up a map at Kamo’s shop. Quest: Muster at the gates. He will take you there if you ask him. It’s better to go yourself: it’s in the NE corner of the courtyard. Have a good look around and talk to some folks for some basic information. RavylXsinc is the Market Stall holder. Balor manages the Magic Theatre. Don’t miss the treasure chests! There’s one along the North wall past the sheep pen, and another along the S wall behind the last market stand. There’s a third chest by Kamo’s shop, too. Be sure to smash open barrels and vases, too. If you try to leave without collecting the Wilderness Map that General Arlo ordered you to get, you are stopped at the gates by the guard, Alfred Trell.

To get to Tal’s room now or at any time, climb the stairs to the right of the door leading South away from the castle. Examine the bedside shelf to find the BATTLE MANUAL, which goes under Quest items in the Valuables menu. All it does is remind you to use R to clear surrounding enemies (The Sweep Attack). Don’t forget to collect the money from the chest. 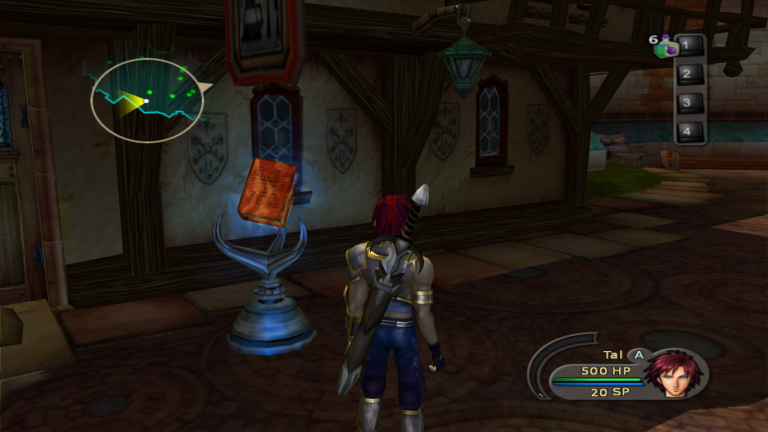 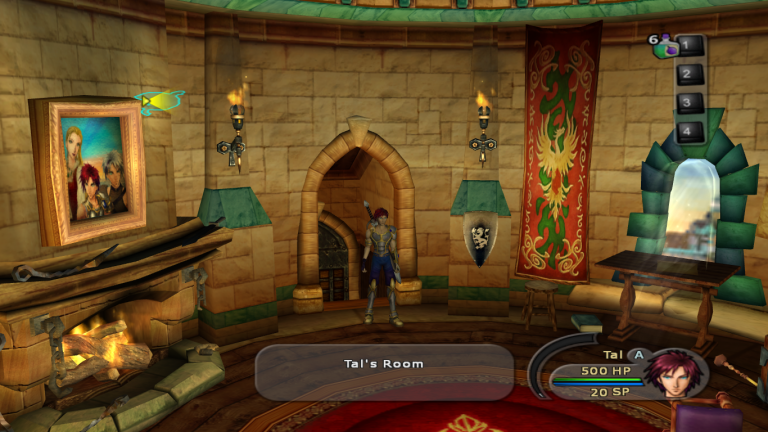 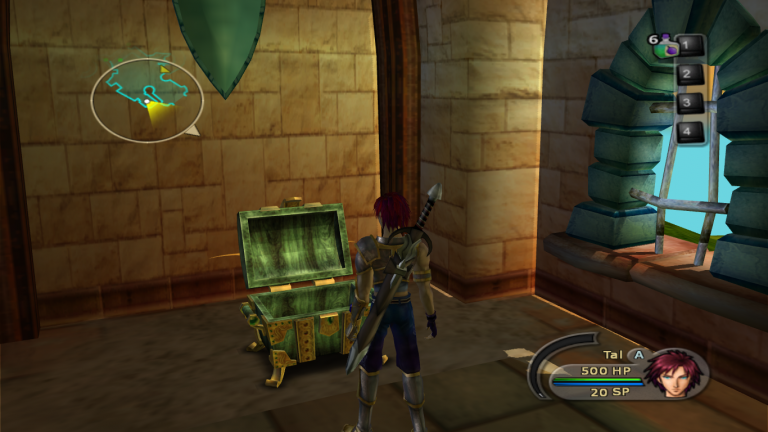 KAMO’S STORE
Kamo’s Store is the one with the Duck Sign outside. Talk to Kamo at the counter, and choose to pick up a map. You have obtained the WILDERNESS MAP. Look at his wares for sale, too. You don’t need to buy anything at this point, though you might want to pick up the status-healing items if you’re particularly paranoid. There’s also a crate you can smash open in the store for a small prize. Leave the shop to start another brief FMV and receive the next part of your mission. Quest Update: Muster at the gates. Now you can exit the castle without being stopped.

Once back outside, talk to one of the 3 kids playing there. You will be led into a game of hide & seek. The kids will steal some of your money and hide in random locations in the city. It’s never the same location for each game. Just wander around the city and you will find them eventually. The last kid you find will give you a RED DOOR KEY. Just hold onto it for now. Quest: The Red Door. If you miss out on this quest due to a lack of money (the kids cannot steal your money to initiate the game!), you can do it later with Ailish.

SAVE STATIONS: Positioned in certain places are “Save Stations” identifiable by its red book. Save when you can.

SOUTH COURTYARD
CHEST ITEM: Wolf Totem
You’re done here. Exit through the only openable gate. In here, take the stairway up. Right at the top, push that green button. Now, quickly go down to the door that just opened – you have 10 seconds. You will find a WOLF TOTEM inside. Continue past the gate. 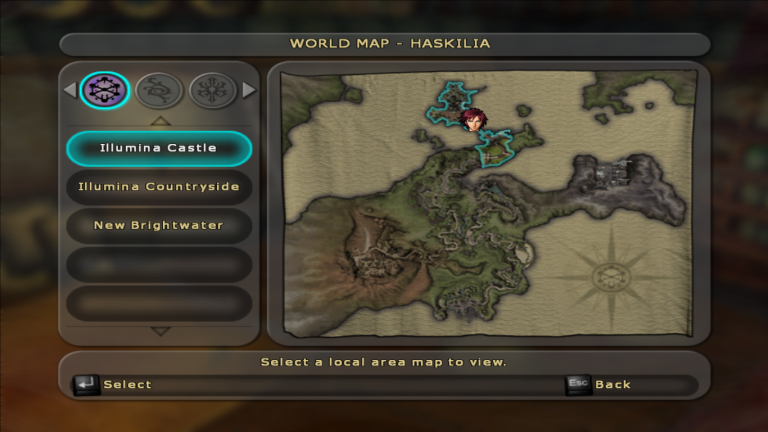 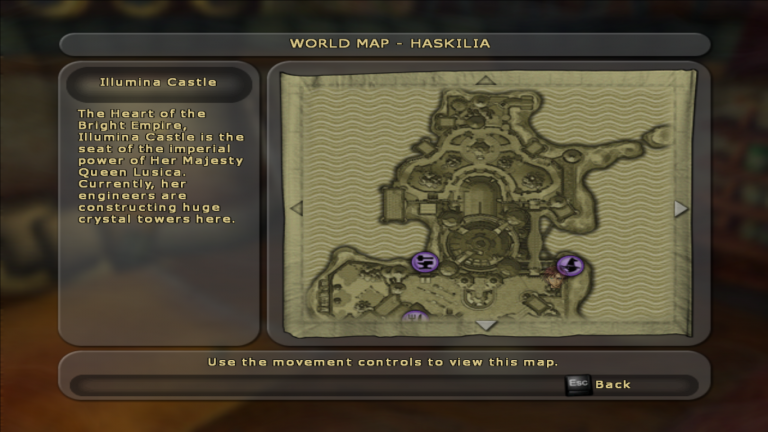 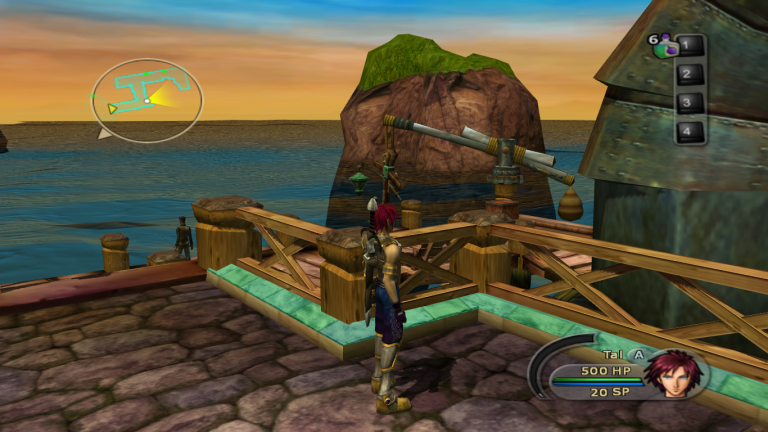 Cross the bridge and notice the save point. You’ve come this far, you might as well use it. Head into the dock area to find many barrels and crates to smash for items to trade later.

Enter the tunnel and go through Castle Checkpoint, past an abandoned market hall and take a left to reach the exit to King’s Road.

KING’S ROAD
As you exit the last gate, you are joined by General Arlo and he orders you to take the 2 rookies and clear the countryside of enemies and to rendezvous in Brightwater Village. Quest: Clear the countryside. Just follow the road, and you will run into some enemies.

So much for your recruits! In this, your first solo battle, it might be wise to use your sole Skill Strike (Shin Splitter) on the melee fighters who all rush you right at the start. Just lure a bunch of them close together, and wham! Anyway, use the large size of the field to maneuver around your enemies. After the fight, check the side of the porch of the farmhouse for a treasure chest.

BATTLE TIPS: Just use the COMBO 2-2-1 to give maximum damage to enemies (and be sure to press the last “1” several times). If enemies surround you, press the R-Button to knock them back. Press 1, 2, 3, and 4 to quickly use items. Press SPACEBAR to block.

After the battle, follow the white arrow on your Navigation Map. Open the gate.

BATTLE TIPS: You lose your rookies here. Use the combo 2-2-2 first, until you have fewer enemies. Block ranged fire. It’s a good idea to attack the ranged fighters first. If an enemy is shielding, try the 2-1-1 combo to stun them, and finish them off with 2-2-1

Continue this path until you come across a standing soldier, a comrade called Waldo Halfpenny. Continue to a tree surrounded by benches. On the left wall, there is a Kariston Altar, where you can offer Wolf Totems in exchange for some powerful items. So offer one. Take the ORB OF MIGHT. Quest: Kariston Altar.

Continue. Every character has special powers. Tal can push and pull blocks. So pull the first block twice, and push the second block. Just a little way after that, there is a kind of well with yellow sparkles coming from it, take note of its location. Continue. After the battle you will most likely level up. To confirm this level up, go to the menu [M], choose the advancement option, select the character you’re levelling up (Tal) and spend advancement points on the available slots. I suggest HP for now. Continue to the next save point.

Notice the busted cart blocking the road ahead. This will be cleared much later in the game. For now, take a left towards the river, and go back along the wall on this side to find a treasure chest. There’s another chest if you climb the ladder in front of the water wheel. Also check out the round blue thing on the ground. What is it?

Cross the bridge to start another fight with a new, bigger, badder monster, the Grotesque. After a moment, some other fighters will appear, so take them out while avoiding the Grotesque. Once you can concentrate on him, dodge his attacks and hit him from behind. While he’s got boosted power (red heart, red glow at his feet), it’s best to just avoid him until the effect fades. Watch out when you get his HP really low, because he’ll explode, damaging you in the process if you’re too close. After the fight, the path to the left is blocked by a cart again, so you have to go to the right. But even before that, go to the save point on this side of the bridge. Past it, and past the house, there’s an outhouse along the cliff wall. It’s got handles, so you can pull it to the side. 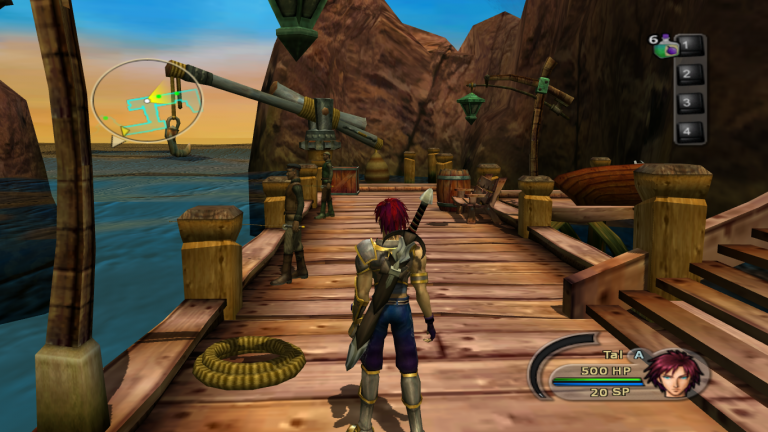 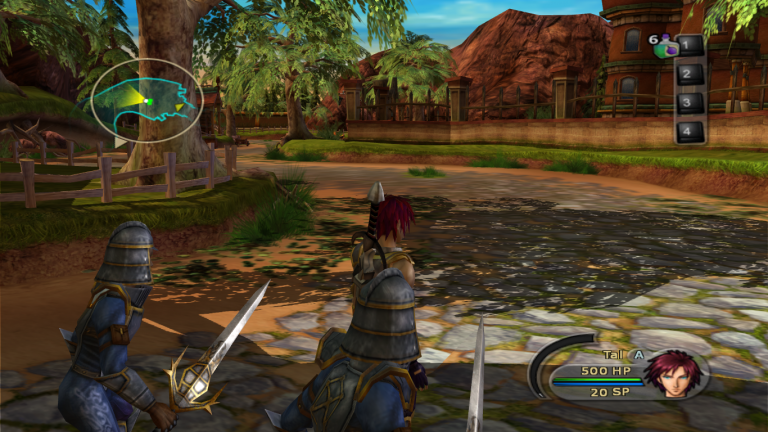 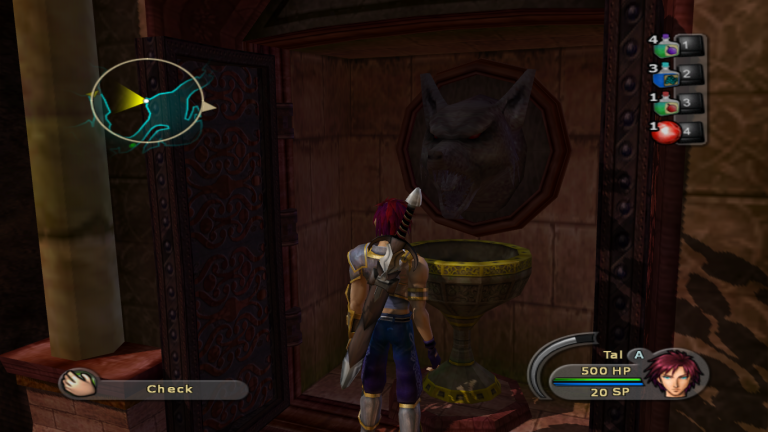 Pull the outhouse to the side to reveal a climbable wall for another character to use later. After beating Grotesque, turn right and follow the road to New Brightwater. Around here you should meet another comrade, Pugley Popp. At the end of the path through the graveyard zone, there’s a gate for you to open to progress further. To the right, though, you can enter a narrow area of the cemetery with many urns to break with goodies inside There’s a statue at the end with an inscription that you can read, with a hint of what to do later. Go through the gate when you’re done to trigger another battle, and go through the next gate when finished.

BATTLE TIPS: Use 2-2-1 to quickly dispatch the beast. If it is standing still and shaking, it’s about to explode. Get away from it! As for its other attack, you can easily avoid it.

Talk to the guard, Birdo Walters, behind the house and check out the shack’s resident in his beach chair. Inside Athlos’ Shack, talk to the other guard, Mardy Farr, to get a hint of what to do later on. Back outside, head down to the beach proper for a fight with 2 waves of Aklorians, with a Grotesque in the second wave. Collect MOJO which is in the treasure chest that appears when you win. This is Tal’s most damaging weapon until you get his ultimate weapon. So equip it right away.

Past the beach, there’s a save point, which I highly recommend that you use. Across from it, notice the Eagle Shrine, which you will return to later. Just ahead… boss fight!

He’s quite intimidating. You have to destroy his shield first before you can damage him. Just avoid his attack (easily), and don’t go near him when he unleashes green breath (even at his back), just stay away. When he’s done, quickly attack him with Juggling Move 2 combo. And stay away. Repeat till the shield brakes. When his shield brakes, he will attack recklessly with his club. Just stay put and let him come to you. Just as he is about to attack, move behind him, and use the Juggling Move 2 combo. He also has a green breath attack, this time from his rear. It’s very easy to avoid. Once the ogre falls, watch an FMV in which Tal receives his first SPIRIT STRIKE, new ARMOUR; a RUNE SCROLL and another quest from General Arlo: Quest: Find Princess Ailish.