Enter the tunnel the ogre came out of and follow it through to the lands beyond. Along the path, you’ll encounter Jurgen, your first trader, who specializes in Furs. You can sell Fur items (like Bearal Fur, Reptufallo hide, Woluf pelt) for a higher price than usual. But save the Woluf Pelt because you’re going to need it later.

Just after you pass the gate to Brightwater, go left to enter the Shadani encampment. Keep going to the corner and you will find a chest hidden behind a camp. In the camp, you can talk to Wazim Hedren, Kirklin-Rah, Kalluzah (Kirklin’s partner) and Lewgart Stin (Emyn Sunn’s fiancé). Head down the path for a small FMV showing off the town. Go down to Brightwater.

Brightwater Village
VILLAGE SQUARE
A couple other points of interest: you can enter the graveyard behind the church and read some of the headstones. Also, behind a trio of houses on the North side of the road, there’s an outhouse that’s locked, but if you rattle the door, you get a funny reply. When you’ve done all that you want to in town, go straight to Densi’s house, the blue house that the road encircles (just behind the boathouse) to talk to Yemi. She tells you that Ailish is at the lighthouse so continue along the main road and take the stairs on the left when you reach the last house. Quest Update: Find Princess Ailish. 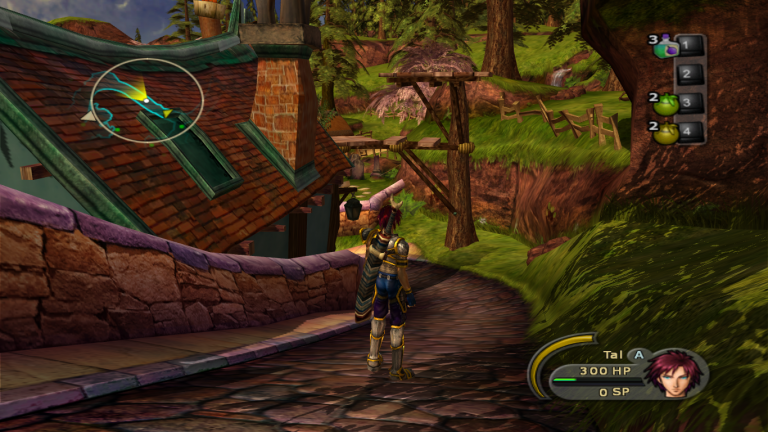 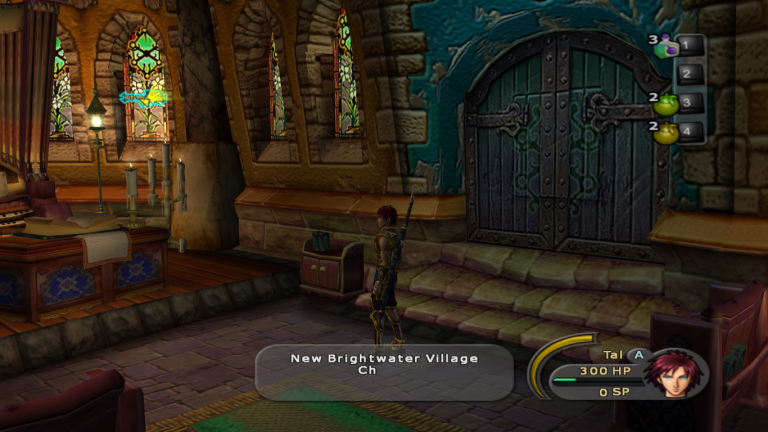 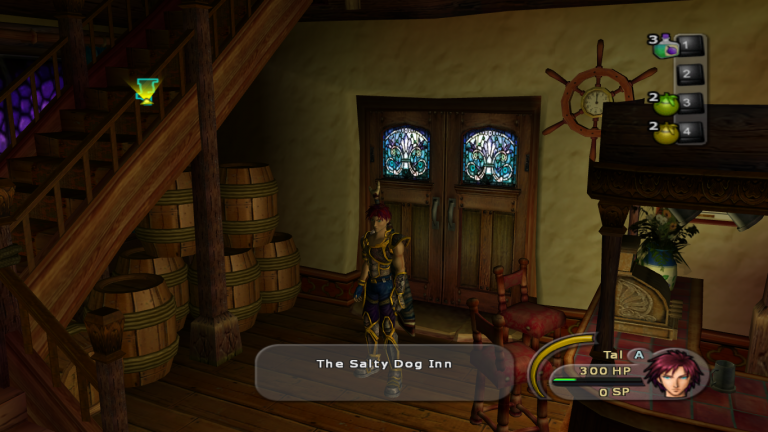 BRIGHTWATER LIGHTHOUSE
CHEST ITEM: 150 Florins
You can see Ailish standing by the lighthouse. Approach her to initiate a FMV, finish the current quest, and pick up a new one. Quest: Escort Ailish home.

Now press [Q], and switch both Ailish and Tal’s AI to D (defend). This will greatly help in battle. Ailish also has special abilities to dispel magic barriers, allowing her to see whatever is sealed behind it. You now travel as a team, and can switch between the two characters at any time. You can now enter the lighthouse. There’s a chest inside, and you can also check under the bed for a Stardust Vial. Talk again to Jim to enable a quest. Quest: Valuable Cargo Lightbulb. 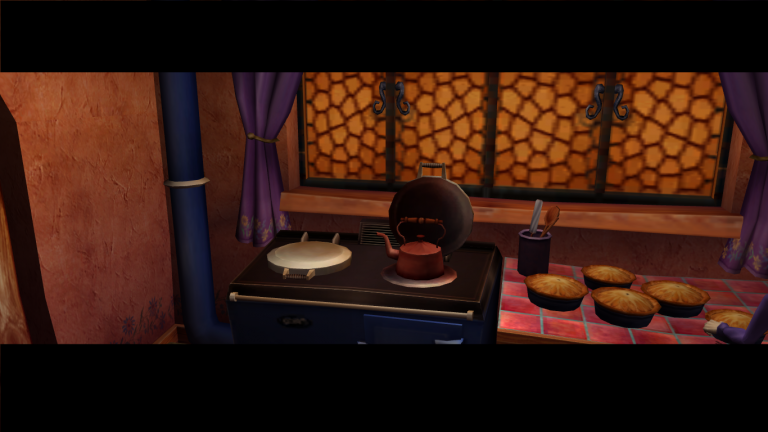 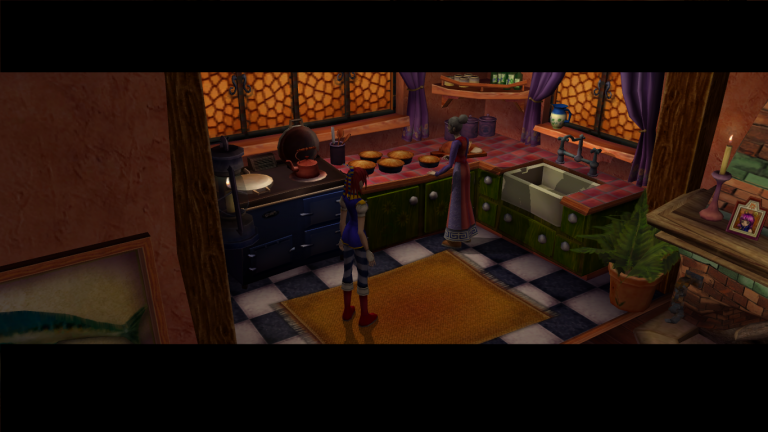 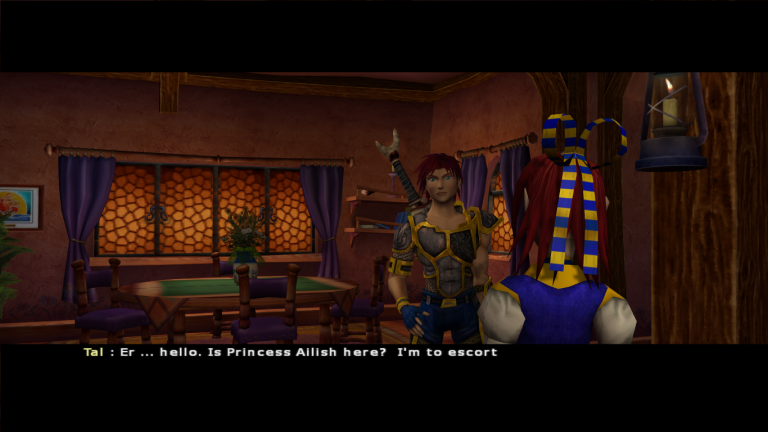 VILLAGE SQUARE (AILISH)
CHEST ITEM: Orb of Vigor
Now exit the lighthouse and keep going to the back of the village where you can see piles of rocks and some mining stuff. Nearby is a pavilion with a ring of benches. You will see a flurry of yellow twinkling lights there. This signifies that there is something magically shielded in there. As Ailish approaches, switch to 1st view (hold [F] or press [V]). If you’re at the right distance, you will see the [dispel] command. Use it, and open the chest. You should receive an ORB OF VIGOR. 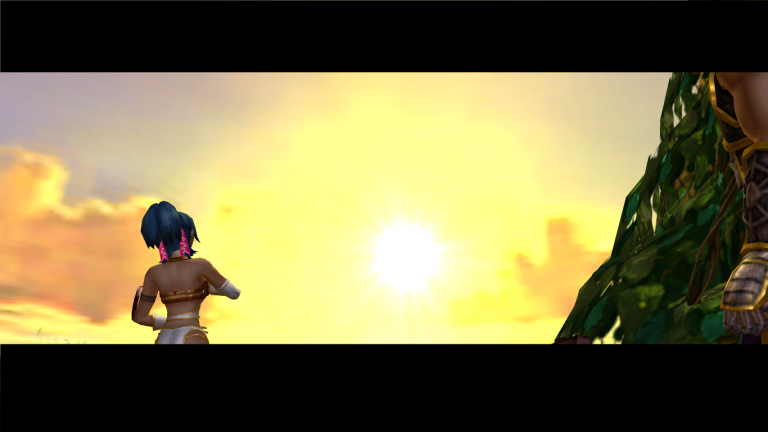 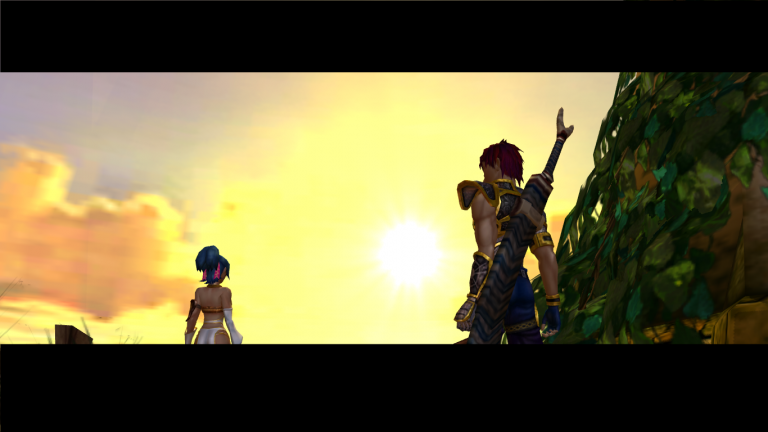 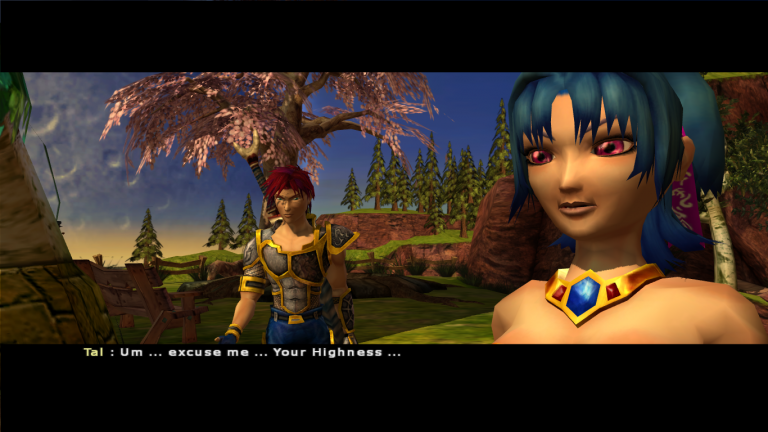 Now go to the church (opposite the village square) and make some donations (total of 25 Florins). Now you can always return to the water plate at the back of the church to recover your HP. You can also play the organ, but the thrill wears off quickly. You can also rest at the Inn. Talk to the barkeeper.

You can talk to Sherry and Sunder-Rah for yet another quest. Quest: Valuable Cargo Lily Seeds; Quest: Brightwater Pearl Collector. When you return to Sunder-Rah for the first time, he will take only 1 Brightwater Pearl from you, give you REMI’S TRINKET and initiate a further quests. When you return with these final 10 Pearls (making 21 altogether), he will then tell you that he has a full collection and reward you with KIRKLIN-RAH’S KEY.

Upgrade your weapon (especially Tal) with Gobbit Bluehammer, the Blacksmith. If you have the money, upgrade it right away with 2 edged runes. You can also engrave it with bat fang runes, although it’s more expensive. For Ailish, just upgrade the royal Scepter. The Xuric’s Shockstaff, although promising, will just be a hindrance in your journey (due to its short range and long reload time). Do not forget to visit Galex at the Salty Dog Inn to get his quest. Quest: Valuable Cargo Suspender Belt. 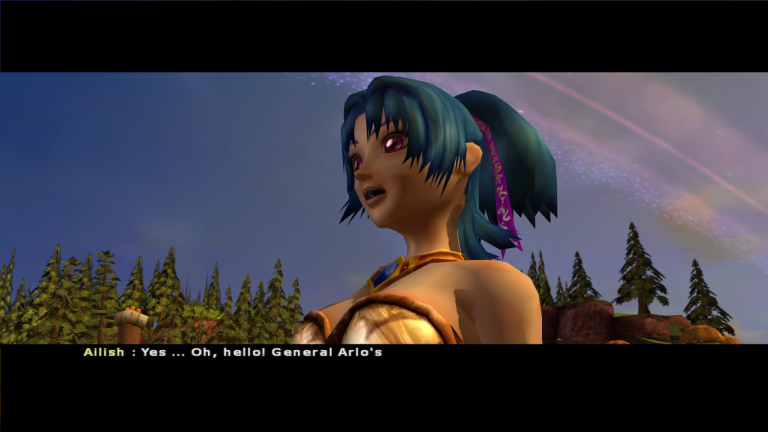 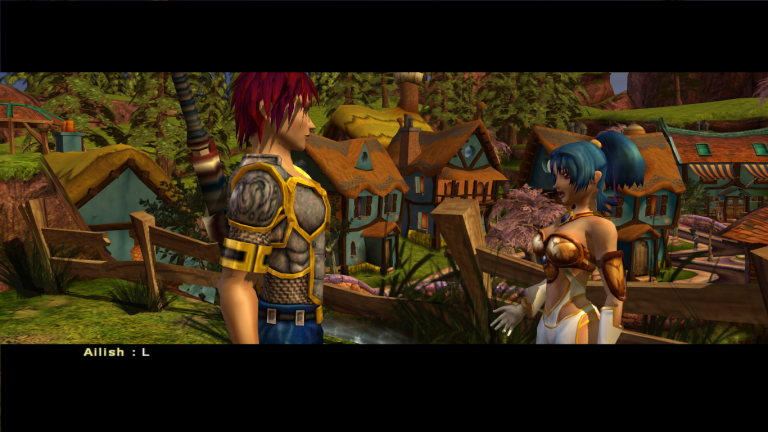 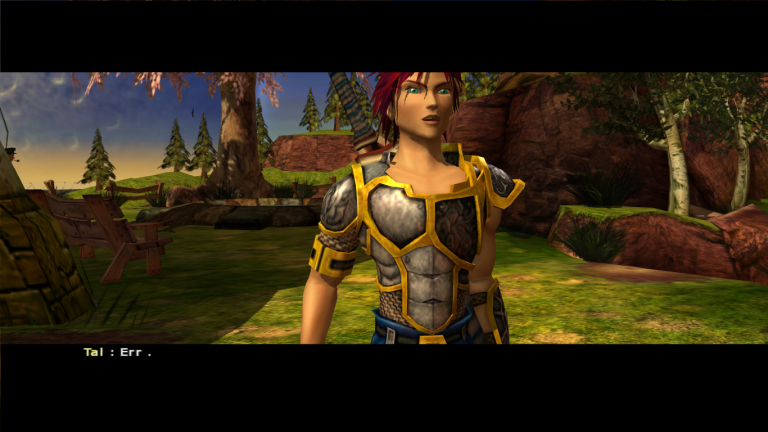 BRIGHTWATER THICKET
CHEST ITEM: 150 Florins
To get here, just head north up the road across the river. There’s only a treasure chest and a Cheetah-Woman (Emyn Sunn, who lives on the Shadani Encampment) who will give you a hint about fighting a certain type of monster.

You can find all the items for the quests received in Brightwater on Brightwater Beach. You have to fight a bunch of enemies first, and you will find these quest items in breakable boxes afterwards. Head over there now. Head back out of town the way you came.

TRAINING AT BRIGHTWATER TUNNEL
Once you pass through the tunnel, you start a brief training mode for Ailish. Checklists of tasks for you to complete will appear at the top of the screen. Just do what they say to destroy the barrels, make a chest appear, then make the cart disappear. Down on the beach proper, you get into a fight with some new monsters.

BRIGHTWATER BEACH
CHEST ITEMS: Orb of Vigor, Eagle Totem
The Aquaticlaws sometimes drop Brightwater Pearls, useful for the quest initiated with Sunder Rah back in Brightwater Village. They should also leave a chest with an ORB OF VIGOR. Use it on Ailish. You can also use Ailish’s Shockstaff weapon to take out multiple Venom Gnats in one shot..

Now, re-enter the beach house with Ailish in the lead. Remember the rumour about the invisible treasure? Use Ailish’s special ability on the wall with the glowing fairies to locate a chest with your first EAGLE TOTEM. You can return to the Shrine for Eagle Totems right now and offer it up, too. It’s near the save point where Ailish’s training took place. You will receive an ORB OF VIGOR. Give it to Tal. Quest: Olivitess Altar. Just keep returning to the beach until you have all the items from the quests. If you collect all the quest items, one of them should get you a WOLF TOTEM in exchange. Hold on to it.

NOTE – Only Ailish can offer Eagle Totems
NOTE – The key you received from Sunder-Rah opens Kirklin-Rah’s tent in the encampment just outside the village. There’s an unreachable chest there that we will collect later using another character to access it. 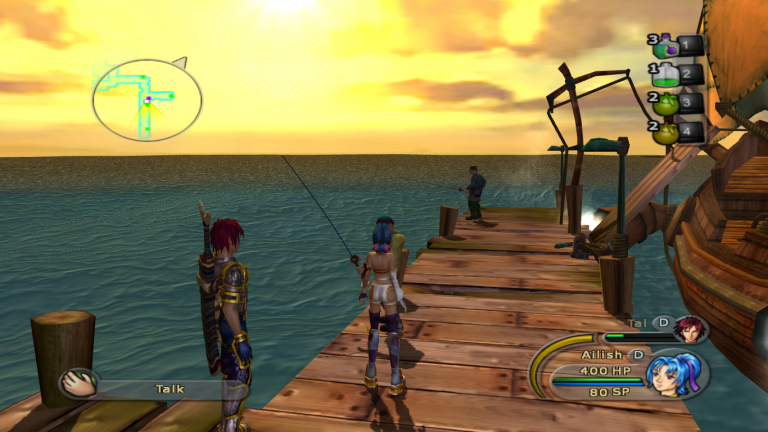 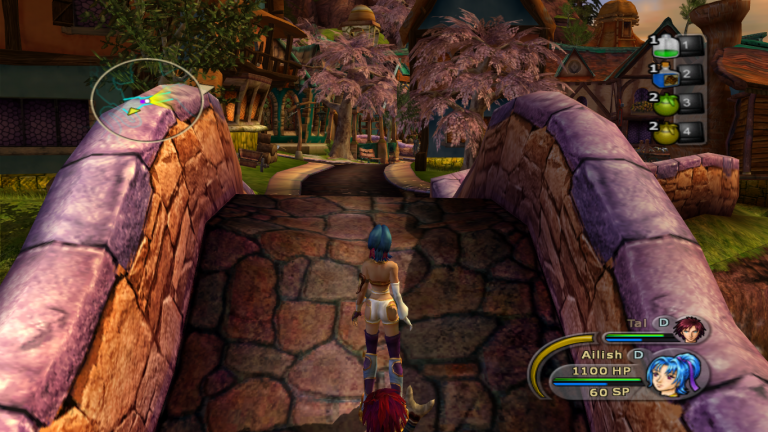 PARHAM COUNTY
CHEST ITEMS: Orb of Might, Eagle Totem
You first encounter some Scarecrows, just defend against their wild spinning attacks and let loose on them when they end, if you’re using Tal. After you pass through the next gate, remember to go through the small cemetery section above the main road to the statue of Ailish’s ancestor. Use Ailish’s dispel ability next to the statue to reveal a treasure chest containing an ORB OF MIGHT. Use it on Tal. Continue through the area, and cross the bridge over the river.

After another fight with Venom Gnats and Scarecrows, head through the gate opposite the cart blocking the other path. There’s a well by the beehives with glowing fairies. Have Ailish dispel the well wall and climb down the ladder to a chest. Open it to get 25XP and an EAGLE TOTEM. Just ahead, the trader across from the Wolf Shrine has returned, now that the Aklorians have been cleared out. His thing is scaly hides.

Go past the sack and continue all the way to the next save point.

NOLAN’S FARM
CHEST ITEMS: Hukin’s Fate [Tal’s weapon], 150 Florins
Continue to Nolan Farm, and enter the farmhouse. There are 2 chests here. One of them contains HUKIN’S FATE (Tal’s weapon). Although it can poison enemies, this weapon is fairly weak. Besides, not all enemies can be poisoned so you are better off with Mojo. Now exit. There is another chest in the back. Continue to Illumina Castle. 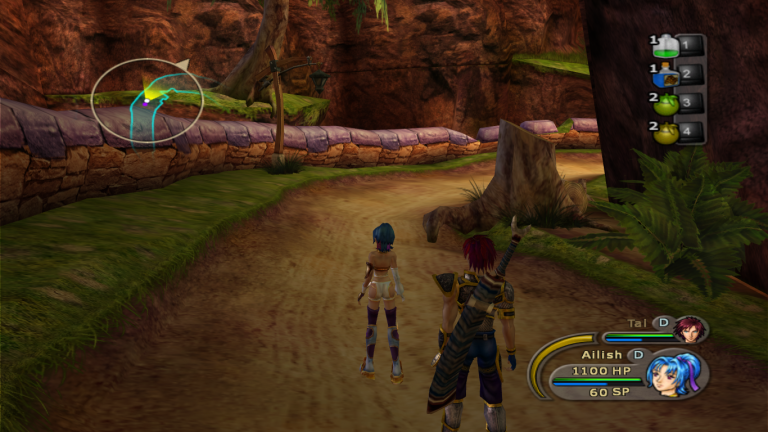 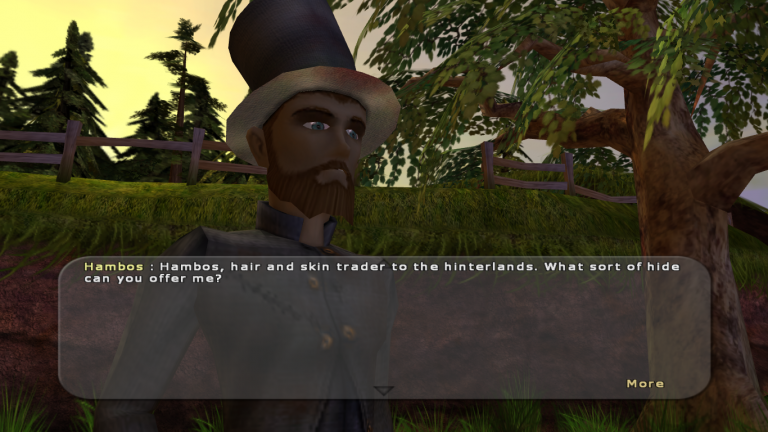 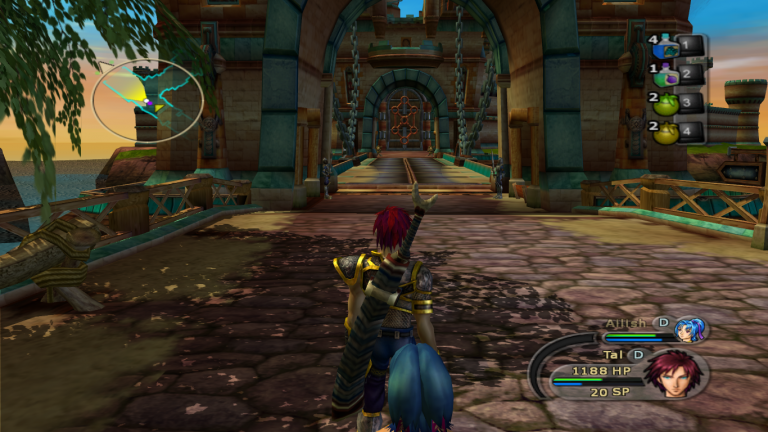 KING’S ROAD
Here you face a long battle, with new waves of Aklorians teleporting in as you advance down the road. At one point, you’ll be prompted to try Tal’s Spirit Strike, but it’s better to wait until the final wave, when Grotesques appears, to lay that particular smack down.

ILLUMINA CASTLE
Just head up the tunnel and go over the drawbridge to complete the quest and to watch another FMV.

TRAINING GROUNDS
CHEST ITEMS: Orb of Might
After you regain control of Tal, go straight away to the training grounds. Quest: Find Arlo. It’s in the far opposite corner of Kamo’s shop. General Arlo will start screaming at you about how everyone who accompanies you seems to die but you always manage to survive including your brother, General Arlo’s son. So, that’s his problem. He informs you that the princess has ordered you to courtroom duty. Quest: Courtroom Duty. Once he’s finished letting off steam, re-enter the training grounds to solve a block-pushing puzzle. Push the left block forward twice, and then go right pull the middle block back once. Now go back outside and push the right block in twice to reach a treasure chest and an ORB OF MIGHT. 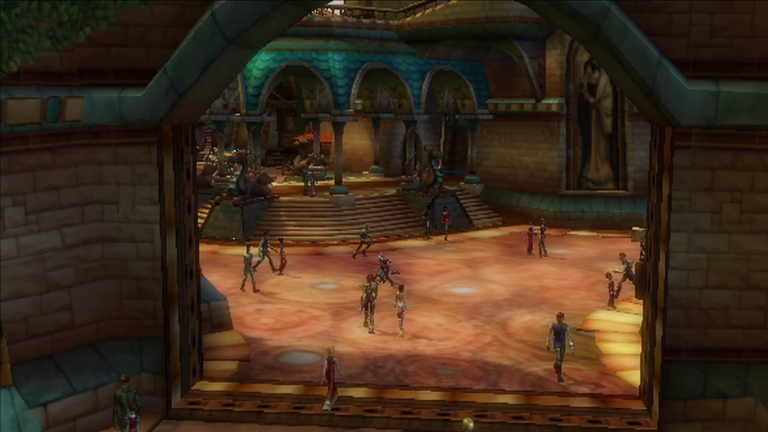 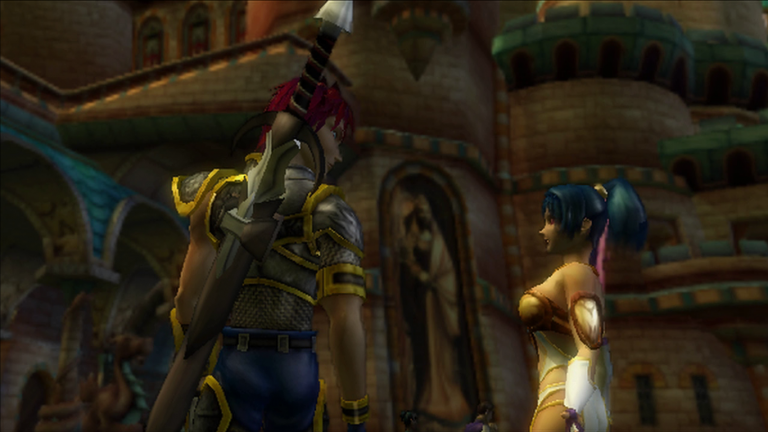 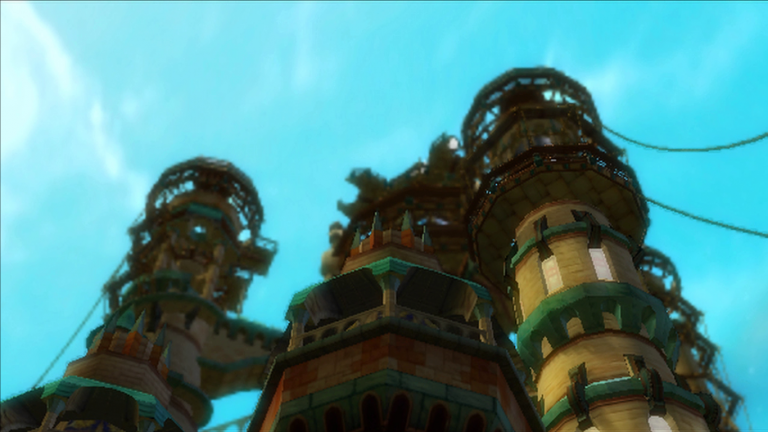 CASTLE COURTROOM
CHEST ITEMS: 150 Florins, 25 Florins
Now go inside the palace. Take a right turn and enter the first door you see. You will see Buki for the first time. She is defending the crystal that is in her tribal village, saying that it should not be removed. However, Elco believes the crystal is connected to the recent troubles and that it should be brought to the castle in order to protect everyone. After Buki leaves, the queen orders Elco to go to Shadani-Mo – Buki’s home – to collect the Crystal (“Don’t return without it!”) taking Tal with him. Ailish watches this and decides to follow Tal. Quest: Follow Tal to Shadani-Mo.

When you control Ailish again, enter the courtroom. The courtroom is like a big clock. Assuming the door you just entered is 6 o’clock, at 5 o’clock talk to the man in red -Ricardo – to enable another quest. Quest: Pelts for Ricardo. There are chests at 11 & 1 o’clock. Exit the palace. 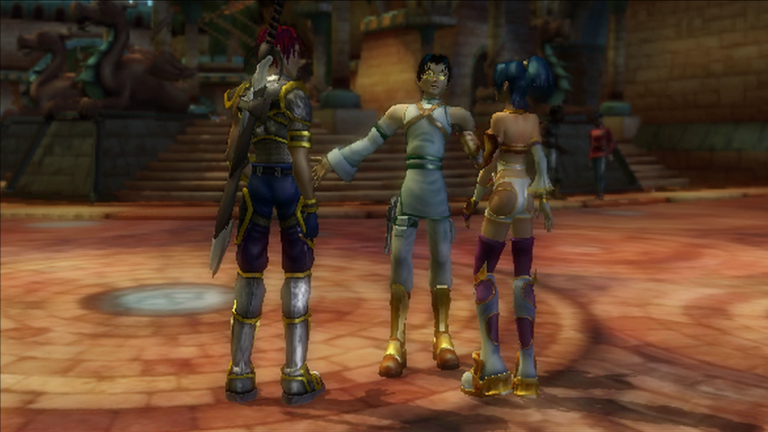 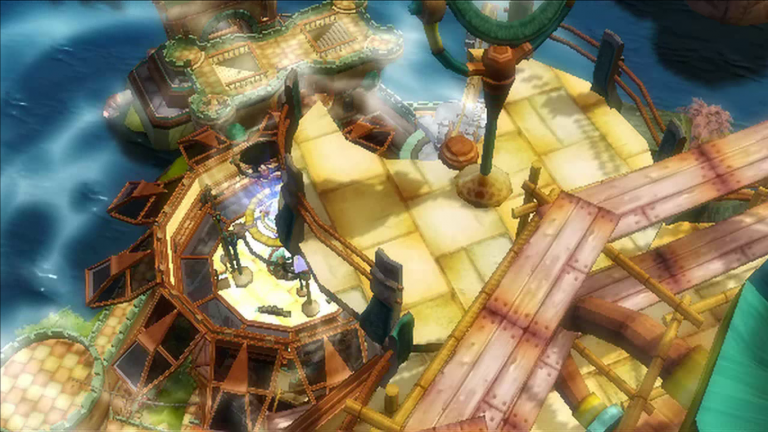 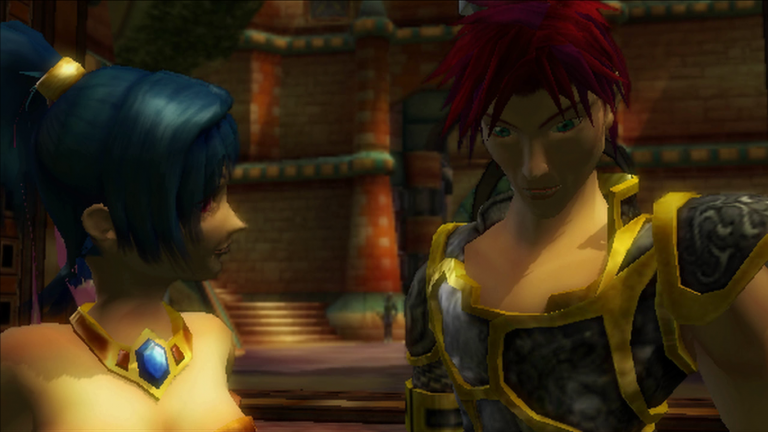 LUSICA’S GARDEN
CHEST ITEMS: 250 Florins, 1000 Florins, 500 Florins, Orb of Power
Go to the gate next to Kamo’s shop (previously locked). At the end of the path, check the left side of the bridge to find a hidden ladder. Go down. Use the key on the red door. This is Talos’ Tower. You can read a diary entry if you check the desk. Enter, go up the stairway, you will find a chest. In it is an ORB OF POWER. Use the orb on Ailish. Exit and walk through the tunnel next to the door and climb the ladder.

This is Lusica’s garden. There’re many treasures in here, in chests and in breakable items. The catch is, there are guards wandering around the garden, and if they see you, they will throw you out. So walk the garden while avoiding the guards. Don’t worry, they’re not that difficult to avoid, and if you do get caught, you can always re-enter. There’re 4 chests in the garden, one of them containing an ORB. Use it on Tal. Exit. If you have the money, have the blacksmith engrave 2 razor edged runes for your Royal Scepter. You’re going to need it. At the very North end of the garden, head up the stairs and to the right, then enter the tunnel to find a magically-hidden chest for Ailish to dispel.

TIP – You won’t ever need to buy weapons at Kamo’s. You will get all the weapons you need for free along the way
TRAINING GROUND
CHEST ITEM: Orb of Wisdom
Go to the training ground. There will be a dispellable wall in there. Give the ORB to Tal.

AILISH’S ROOM
Ailish’s room is up the stairs next to the entrance to the training grounds. Talk to the guard there as Ailish to gain access. Inside, you can talk to Yemi and Tilly, Elco’s wife. If you examine her vanity table, you’ll find some SKILL SALVE. 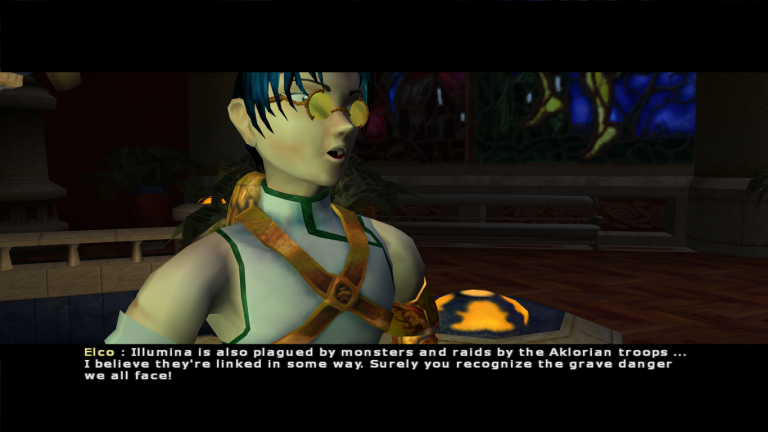 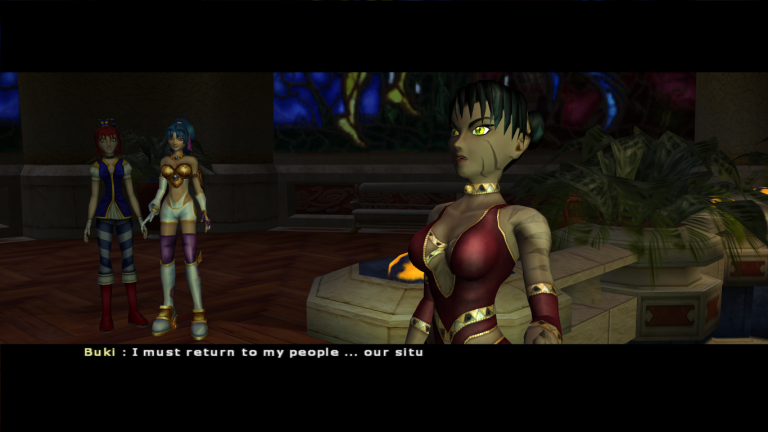