When you’re ready, see Hayton in the portal sites (4th floor). Talk to him and say yes. You can’t return here for some time, so make sure you do everything you want to do.

After the event, you’ll reach Shadow Nexus. Quest: Aklorian Crystal. Go to Hexam’s house first and give the staff you received earlier. You’ll receive a special orb for it. Also return the Fallen Warrior’s Skull to its resting place: in the Hall of Heads.

Go back to Shadow Nexus and enter Crystal Reef’s portal. When you arrive, check around the lighthouse for a chest. Go down, but don’t cross the bridge yet. There’s another chest in the woods behind those houses. Now cross the bridge. Go behind the first house you see. There’s a chest behind that small sack. Use Buki to climb up another wall. You’ll get Buki’s weapon. 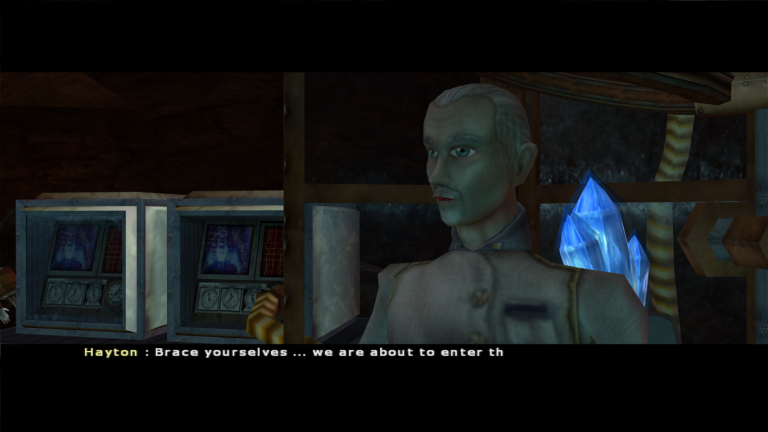 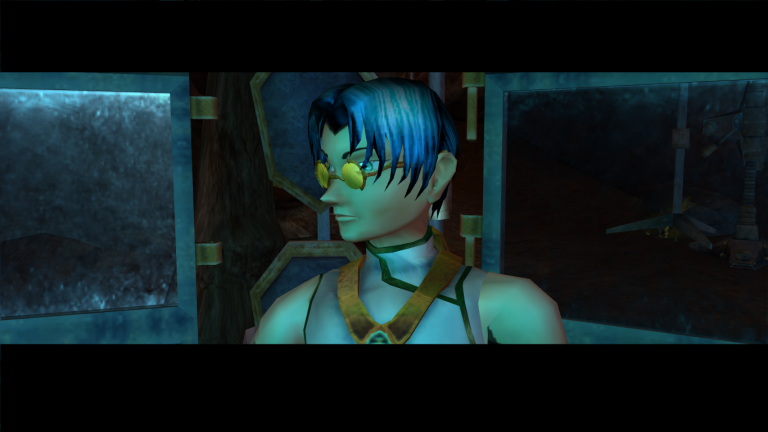 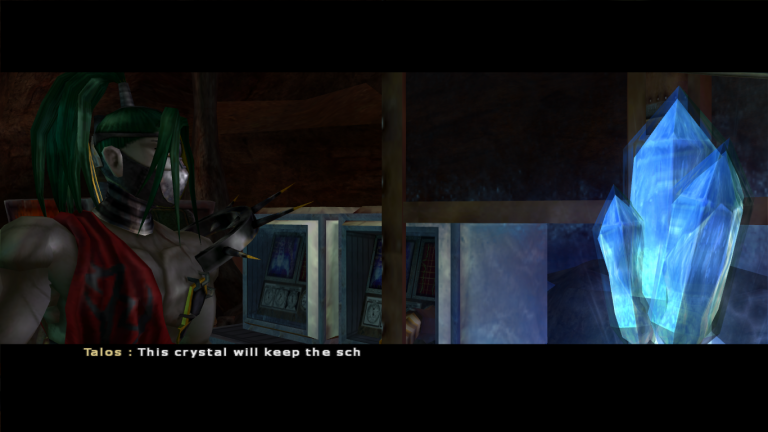 Go to the next house. Use Ailish to climb up and dispel a chest there. You’ll get an ORB OF MIGHT. Now go down and towards the back of the village. Have Ailish dispel a bridge there. There’s another useless weapon for Ailish in the chest in that wood – CHILLTOP CANE. Go to the church and talk to the man standing in front of it. After that, visit the graveyard behind the church and have Ailish dispel another chest. You’ll get another ORB OF SANCTUARY. Check the grave for some money. Go up to Mewsley Mansion (it’s where the Shadani Encampment was back in Illumina). Enter the house and talk to Samuel Mewsley to get another quest. Quest Update: Aklorian Crystal. Go back and talk to the priest. He is protecting the children that are in sanctuary in his church and will not allow you to go in to speak to one of them about the Aklorian Crystal. To prove to him that you mean no harm, you have to fulfil a quest. Quest: Holy Symbol of Tetsu.

Now go to the Docks and talk to the only man there. He will give you a key to check the boathouse for items that he finds and stores. Quest Update: Holy Symbol of Tetsu. Check the boathouse using Tal. Push the blocks around and you should find a chest. Quest Update: Holy Symbol of Tetsa. Give the symbol to the priest. Enter the church. Talk to the kid. Quest Update: Aklorian Crystal. Talk to the priest again and he will heal the whole party. Go up and talk to Samuel Mewsley again. He will give you permission to use the elevator situated just below the mansion. 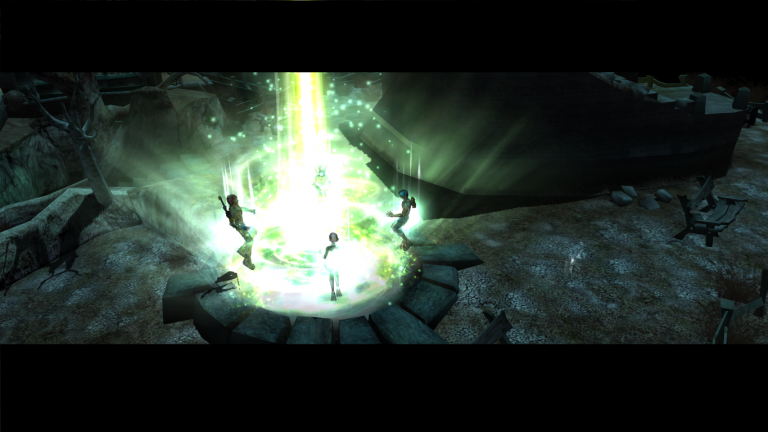 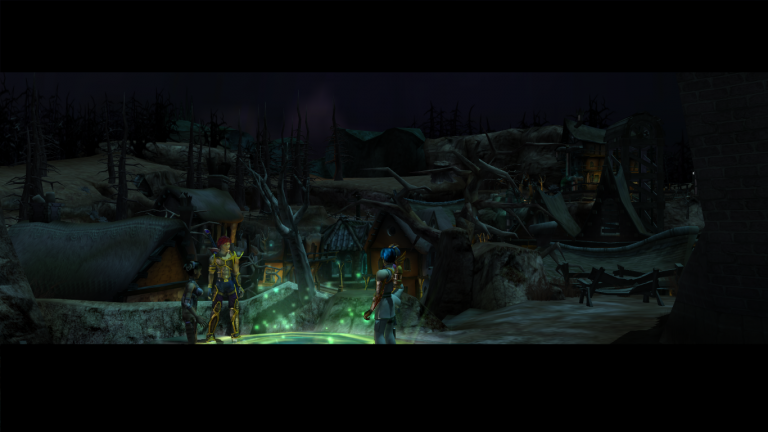 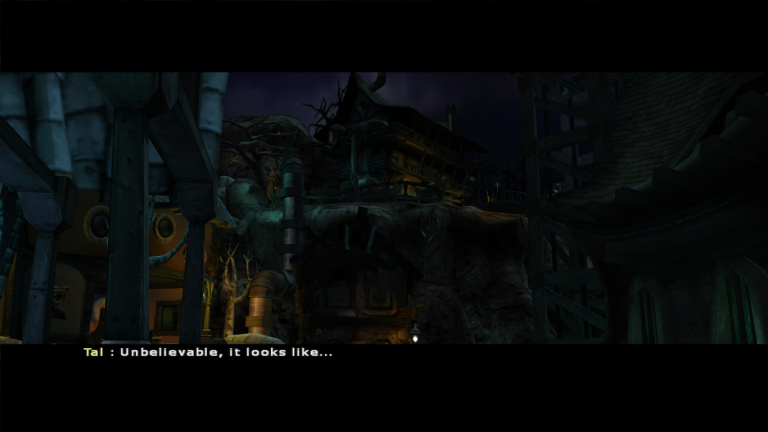 Quest Update: Aklorian Crystal. Head into the grotto to learn just how childish Tal and Elco really are. Continue down the path until you reach the next major room. Tal and Elco are lured into the Siren’s Lair, and the 2 girls are left alone.

Cavern Take out the waves of bad guys and go around to the opposite side of the central structure. Climb the ramp and step on the glowing circle in front of the statue. You have to find 2 Mermaid Pearls to offer the statue. Quest: Pearls for the Mermaid Statue. Go back down the ramp and enter the door on the East side of the room (there’s also a save point if you take the bridge going straight from the statue).

Go up the ramp and cross past the waterfall, going through the next door. After a fight that includes a Crystal Scribe, have Ailish dispel the rock with a skull on top. Walk onto the platform it revealed and ‘use’ it to cross to the centre platform. There, dispel another rock and ride the platform again. Have Buki climb the wall and press the green button. Take the platform back and ride the new one (directly across from where you just arrived). Open the chest it brings you to acquire the Shell Key. Retrace your steps to the previous area. 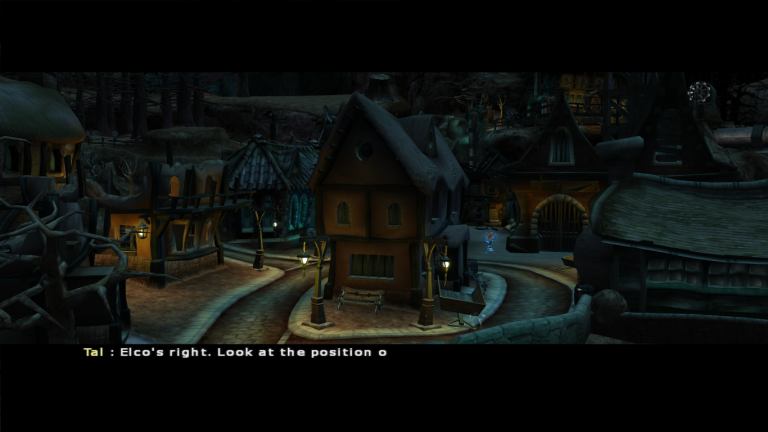 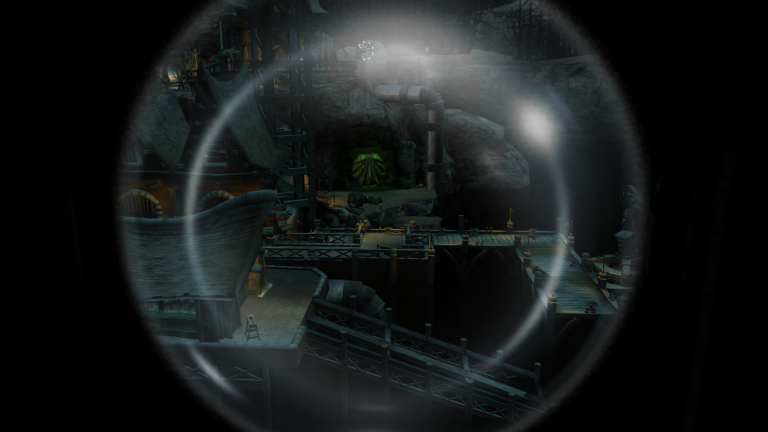 Once there, go up the stairs. Go straight ahead at the first fork. There’s a chest there. Go back up and continue the stairs. Have Ailish dispel a bridge and use the Shell Key there.

Go through and press the switch. A tune will play with the notes A, F, G#, D, and E. Now go left and see a bunch of circles there. You have to step on those circles according to the order of the notes. The order of the notes makes a “star” starting from the note A (the farthest circle). 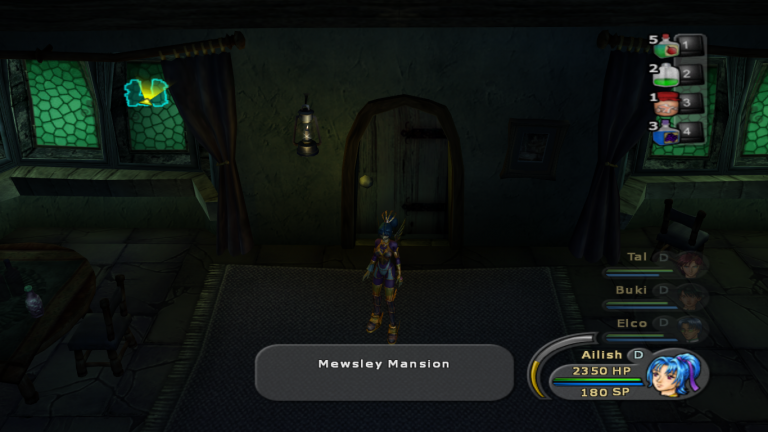 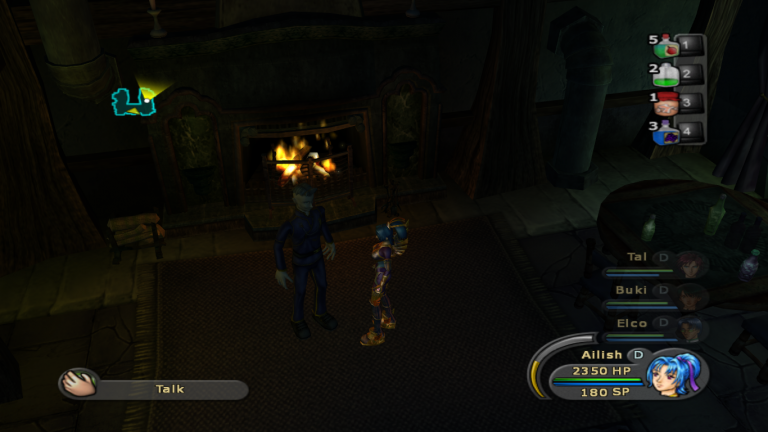 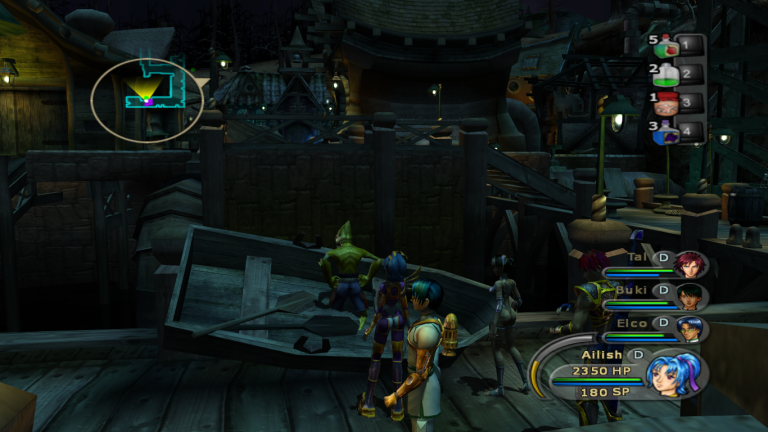 When that’s done, make for the right side of the cave. Collect a MERMAID’S PEARL there. Quest Update: Pearls for the Mermaid Statue. Exit and return to the stairs room. Take a right and collect the chest there. Now take a left and enter that green flag door. You’ll see a save point. Go in.

You have to get both Buki and Ailish to the giant clam to receive its prize. Have Buki go left and climb the wall, first pull the lever, then push the green button. Move Ailish along the new bone bridge to the next landing, go left and pull the lever embedded in the wall, then go across the next bone bridge and pull the lever there. Ailish now has a bridge to a treasure chest. Open the chest for an ORB OF VIGOR and pull the levers again. As Buki, push the green button once more to finalize the path for both to the giant clam. Switch and move both women until they’re standing on the glowing rings. This opens the clam to reveal the next Mermaid Pearl. Solving this puzzle nets you 200XP too. Make your way back to the central chamber where the boys disappeared – to the mermaid statue. Quest Update: Pearls for the Mermaid Statue.

Go back up to the mermaid statue and give it the Mermaid Pearls. Quest: Defeat Nassaria. This opens the shell door that Tal and Elco were taken through. Head into it and go down to the next inner chamber. Immediately go left and use the save point. Head down the ramp to the centre of the room. 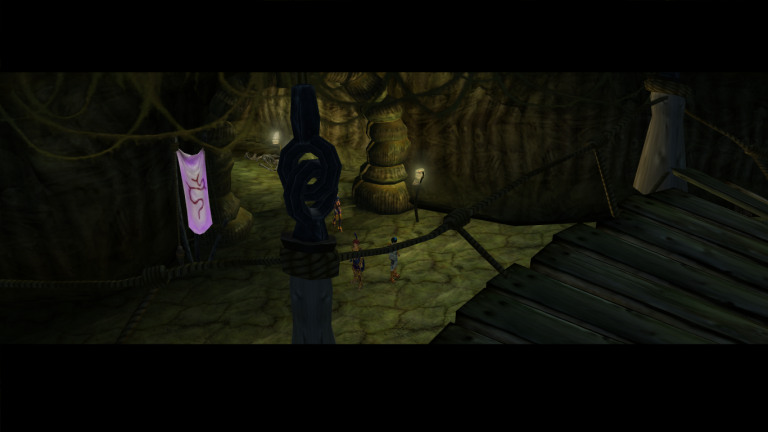 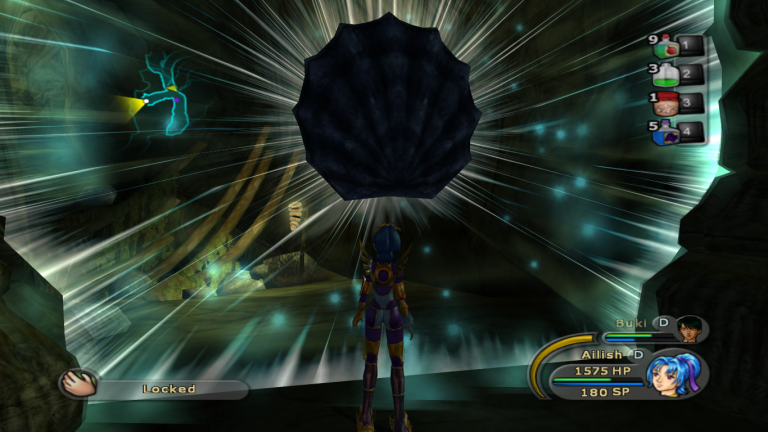 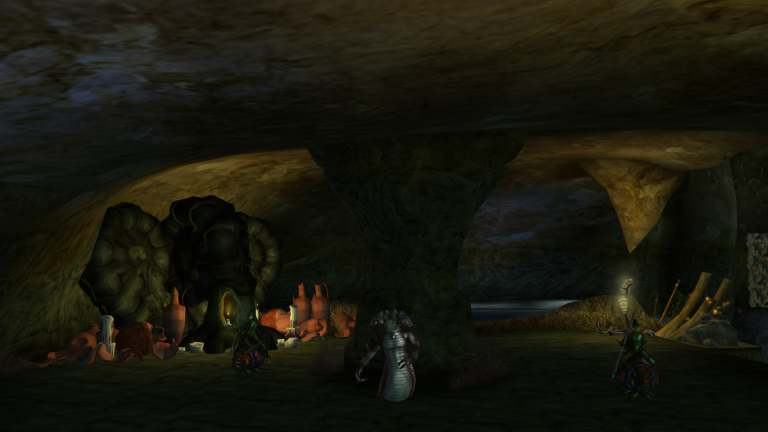 Make sure you equip Night shadow, it’ll help a lot. Start by casting Gaze of the Wind (if you have it) and re cast it every time it wears off. The battle arena will look like a round centre and 4 concaves on each diagonal corner. The siren will dive around and, should she decide to show up, she’ll tell you first by showing her tail. The trick is: she will show up from the concave LEFT of her tail. Never from the right. When she does show up, shoot her. As for the siren attack, it’s easily avoidable. She will strike with her thunder spear, either a swing attack, or a jabbing attack. You can dodge easily by staying near the concave diagonally from her body. She also has a tail attack which is easy to dodge as well. Just move around. When you give her adequate damage, she’ll start charging you. Just stay out of her body line and you should be able to dodge it. She will lift her body before she charges so you know when to move. You receive the DISPELLING SCROLL as a reward. Head along the plank bridge that appeared. When you reach the end, a FMV is triggered.

DEPTHS OF THE GROTTO

You’ll receive Tal’s final armour. Quest Update: Aklorian Crystal. Quest: Rescue Ailish and Buki. Head up the path around the lake until you reach a wider clearing. Note the door on the right with yellow fairies. Only Ailish can open this, and she isn’t here right now, so just remember to come back later. Head through the left door and go up the stairs. Once you emerge from the tunnel, the stairs split. Go straight ahead to reach a treasure chest, then go back and take the side path to continue. Keep going, pass a save point, and keep going down until you reach the floor.

It isn’t really much of a maze. There’s just one winding path with a few little side alcoves, nothing to get lost in if you keep an eye on the navigation map. What can get annoying, though, is when you get in a fight and your partner keeps running way off after more enemies – and you can lose your orientation. Equip Tal with a poisonous sword to cancel out the Hydrogenates’ regeneration ability. 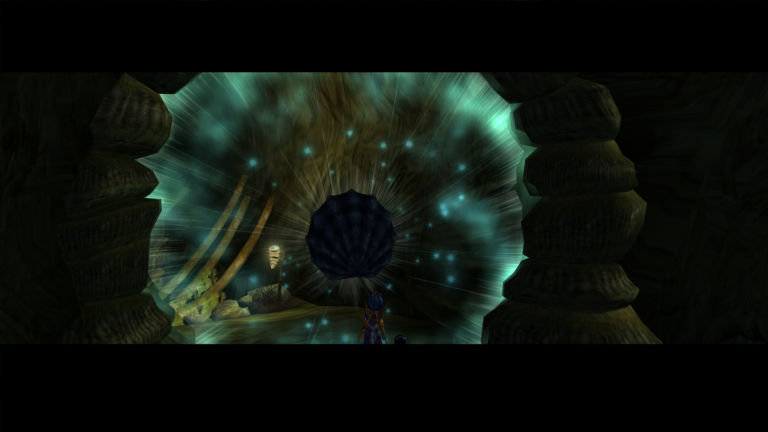 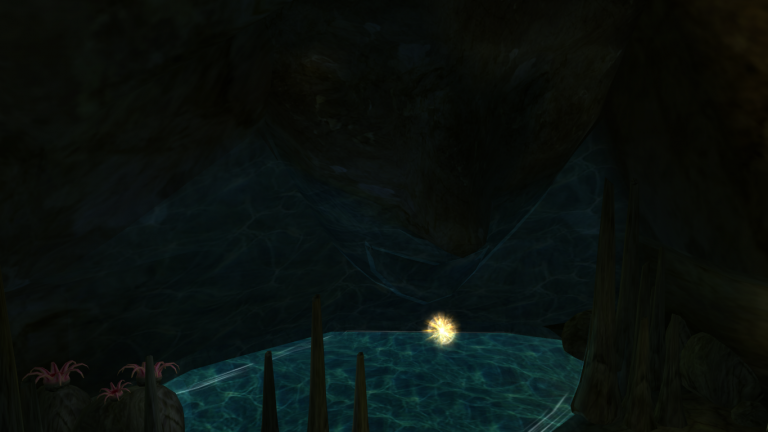 After a few fights, you’ll reach some stairs, signalling the end of the maze. Before going up them, take the last side branch of the maze (check you navigation map) to reach a treasure chest. Go up the tunnel until you reach the end of the cave. There are 2 pink shells on the sides. The left one contains a Healing Potion, so examine it to retrieve it. Don’t forget the open the chest for a new weapon for Tal. Have Tal approach the rock at the end of the cavern and pull it back to open the way back to the main chamber.

After a fight, head out the way your first came in, on the W side of the cavern. Head back out through Dead Fish Cave to get back to Crystal Reef.

Use the elevator and talk to Samuel Mewsley twice. He will give a KEY to his boathouse. Quest Update: Rescue Ailish and Buki. Go down to the warehouse. Collect the 2 orbs there. Now engrave some Anti Evil and Anti Venom runes onto Tal’s armour. Talk to Finbar in the docks to enable another quest. Quest: Collect Eden Coral. Last, you can recover your health by talking to the priest in the church. 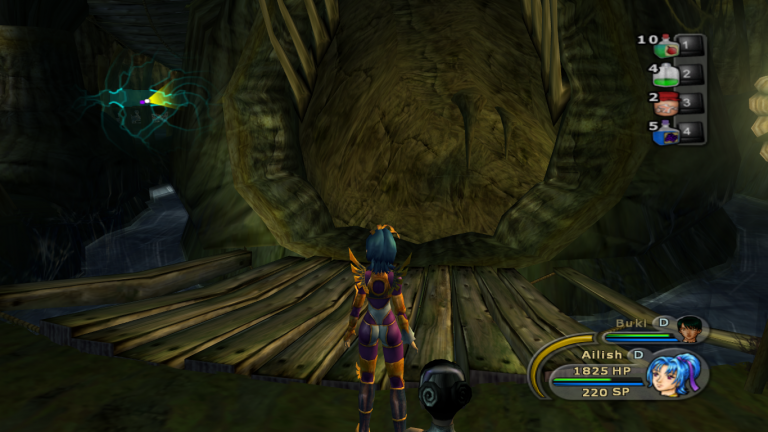 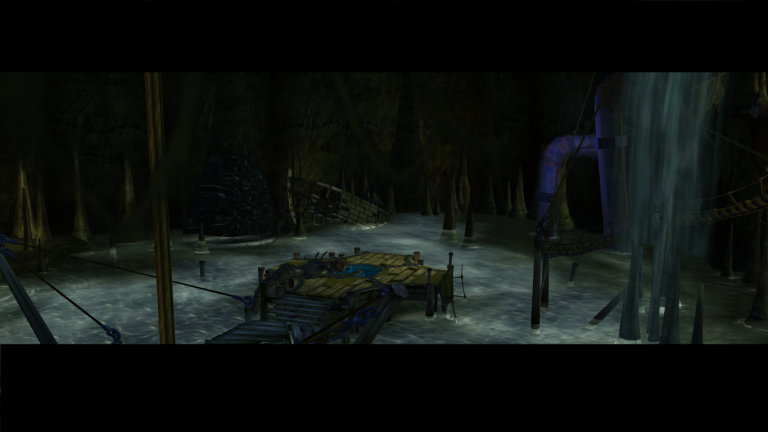